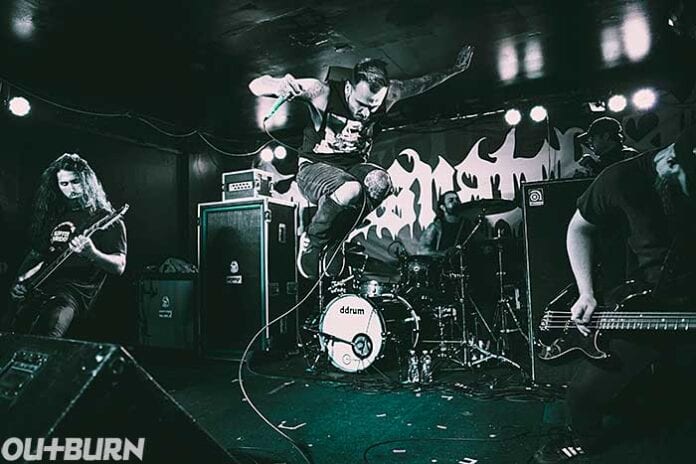 REVIEW AND PHOTOGRAPHS BY DOMINIQUE D’COSTA

The lights dimmed and the energy of the crowd intensified with anticipation for the New England local, Great American Ghost. The band released their third LP Power Through Terror just 10 days before the show, giving fans plenty of time to learn every lyric.

Without hesitation, the band jumped into a powerful performance with an angry and aggressive sound combined with strong lyricism. Lead vocalist Ethan Harrison moved from head to head in the crowd, singing every word with them as if it would be their last. The way Harrison held eye contact with the crowd allowed for the true bond between the band and their fans to be felt throughout the venue.

Great American Ghost mixed in songs from their 2017 album Hatred Stems from the Seed, as well as their newest release Power Through Terror. Song by song the crowd went wild and mosh pits broke out filling the entire room. “Prison of Hate” and “Altar of Snakes” (off of Power Through Terror) were easily the fan favorites of the night. Every person was screaming, “We are more dead than alive,” along with Harrison, creating a dark but beautiful moment. The menacing red lights during both songs are what unequivocally set the tone for the heavy and unforgiving nature of the music. Corruption and malevolence are a strong theme for Great American Ghost as they question the overall legitimacy of business and religion.

Members of the band brought their own, yet equal amount of energy into the performance. It was apparent that their individual love for the music combined is what created such an unforgettable performance. Besides Ethan Harrison’s natural intensity as a lead, guitarist Niko Gasparrini had the crowd mesmerized as he swung his hair in complete synchronicity with the music. With every hit and every swing, Gasparrini became one with the music, bringing a sense of dominance to the stage. Bassist Joey Perron allowed the violent sound of Great American Ghost to move him while he played. Perron bent with each riff and dropped with every drop, allowing the music to carry him through the set. Drummer Davier Perez was a testament to pure strength. With music of such high intensity, it takes a great amount of energy to play every note. Perez did not disappoint, playing each note of each song more courageously than the last. As a whole, Great American Ghost puts on one of the darkest and most tantalizing performances of the hardcore scene.

When it comes to smaller venues, the success of a concert relies solely on a band’s stage presence and performance. This is what allows musicians of pure talent and inventiveness to shine through the rest. Great American Ghost is a perfect example of talent and dedication to the craft. This band comes with enough energy and excitement to fill one hundred rooms. From their aggressive riffs to overall rebellious nature, Great American Ghost is a band to see time and time again.