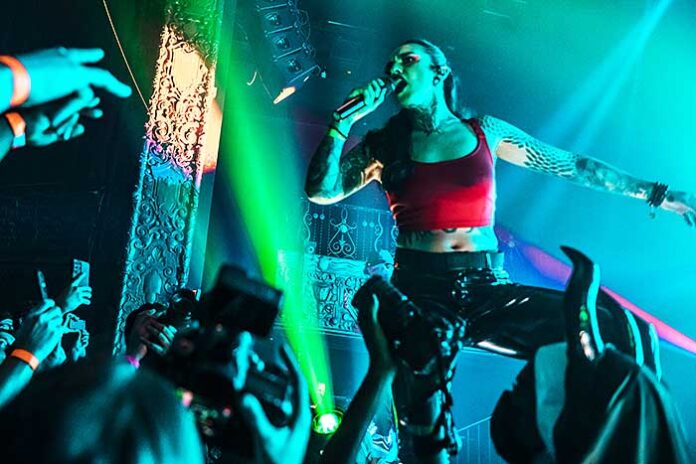 COMING TO AMERICA TOUR
JINJER with SUICIDE SILENCE and ALL HAIL THE YETI
The Belasco
Los Angeles, CA
10.30.2021

Halloween weekend is always enjoyable, and it regularly has some extra sugar and spice to make it pure perfection in LA and other big cities. Saturday was the night before Halloween, and this evening’s event was the Coming to America tour with All Hail the Yeti, Suicide Silence, and Jinjer at The Belasco. The venue is gorgeous. Upon entering the main room, everyone’s eyes are drawn to the art and architecture of the walls and ceiling.

We all packed in as tight as we could, which felt weird to do during a pandemic, but everyone was vaccinated or had to show proof of a negative test within the last 48 hours. First up was All Hail the Yeti, hailing from Los Angeles, with their heavy metal laced with groovy riffs. Fans will find their set has some old goodies, along with new tracks. It is a feast for the eyes, and earworms will burrow into your brain and last for multiple days following exposure. Mark your calendar for November 12th, all Hail the Yeti’s seven track EP is set to be released via minusHead Records. All Hail the Yeti is Connor Garritty (vocals), Nicholas Diltz (bass/vocals), Dave Vanderlinde (guitars), and Ryan’ Junior’ Kittlitz (drums).

The room was a buzz after All Hail the Yeti’s electric set. The night wasn’t close to over yet, though. This lineup was one of those fantastic combos that equals pure perfection. The lights dim to blackness, all you hear is the cheers of the crowd. Then the guitars and bass hit. Suicide Silence stormed onto the stage and kicked right into the headbang inducing “You Only Live Once” and got down to business. The fans reciprocated the enthusiasm on stage, photographers were dodging crowd surfers, and mosh pits were popping up throughout the crowd, and it’s all warmly welcomed after being deprived of large metal shows for the last 18 months. It still feels surreal to feel the wall of metal riffs and bass with someone you don’t know next to you. Suicide Silence has had its ups and downs with fans, but seeing the energy they bring to every show proves they are far from being done, and fans can expect amazing things on the horizon. Suicide Silence is Eddie Hermida (vocals), Chris Garza (guitar), Mark Heylmun (guitar), Dan Kenny (bass), and Alex Lopez (drums).

Closing out the pre-Halloween celebration was Ukrainian metalcore act Jinjer. The band is stronger than ever and released the phenomenal album Wallflowers in August via Napalm Records, which has received nothing but incredible responses from fans and outlets worldwide. The album title track’s music video has been out for just over 30 days now and has hit over a million views. Congratulations to Jinjer on this tremendous milestone. It is well earned.

Jinjer live is everything you would expect—loud, aggressive, powerful music built by the perfectly boundless vocal range of Tatiana Shmalyuk that spans from soulful and gentle to intense and brutal. Adding to the vocals is immaculate and technical guitars of Roman Ibramkhalilov, the monstrous bass of Eugene Ulasevich, and the complex rhythms of Vladislav Ulasevich on drums. The stage had a build of large LED panels that created an ambiance with multiple lighting patterns and colors that are hypnotizing with the songs, but that didn’t stop the movement and excitement of the fans. Jinjer puts on a complete set of songs that perfectly portrays who they are, heavy metal with little twists here and there that really differentiate them from the mainstream.

All the bands on this tour package are no strangers to the festival circuit worldwide, and it’s easy to see why Jinjer, Suicide Silence, and All Hail the Yeti are always a crowd favorite. The Coming to America tour has only just begun. It will travel across the US until early December. Dates are selling out, though, so grab a ticket now. You don’t want to miss this heavy metal tour that brings the noise and energy we’ve all craved.