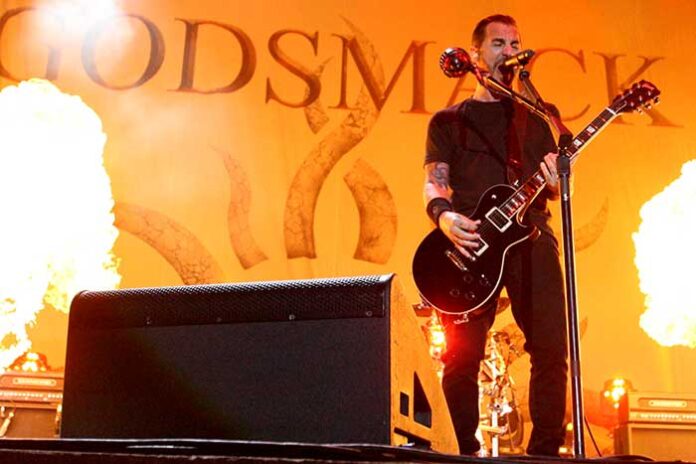 LIVE REVIEW AND PHOTOGRAPHS
BY BELINDA REEDY AND CHASE HINTON

2022’s Earthday Birthday was nothing short of a celebration of life and nature at the Central Florida Fairgrounds on April 23. While the rescheduled show back in September of 2021 was great, as always, this year felt different—better. For fans, not only did it celebrate the Earth and conservation, it also spread the optimistic feeling that we can finally scrap the new normal and just feel normal, even if we aren’t quite finished yet with COVID. The large crowd had an uplifting spirit, and the artists were overjoyed to be performing live again.

Living Dead Girl appeared on the Even the Odd Stage, the smallest of the three stages at Earthday Birthday. The band did its best to manage the stage, but it limited the movement and potential energy of the members. Lead singer Molly Rennick has a great stage presence, and even in the tight space, she worked the crowd into a frenzy. Her voice seemed a bit tempered, perhaps by the sound system or the allergies that plague everyone that comes to Florida this time of year, but Rennick turned in a performance that rivaled many others and solidified the fact that Living Dead Girl belongs on a much larger stage.

One band that was lost in the shuffle was The Convalescence. A later set time can occasionally be a curse, and going on the Even the Odd Stage directly between two big acts, unfortunately the band didn’t get the attention it deserved. The Convalescence’s sound and performance was also too big to be confined on the smaller stage, but it didn’t stop the band from leaving it all up there and not disappointing the fans.

Fame on Fire is having quite the year and playing at Earthday Birthday was no exception. The band had the dubious task of getting the midday crowd up off their blankets and rocking, and they rose to the occasion, delivering a well put together, prime time deserving performance at 1:55 in the afternoon. While it wasn’t peak summer temperatures yet, it was nearing the upper 80s with a west facing stage, but that didn’t stop Fame on Fire from delivering a hard-hitting and crowd motivating performance.

Wage War became an instant fan favorite by not only melting the main stage, but also conducting an intimate acoustic set during their appearance at Earthday Birthday. The highlight was hearing normally heavy artists strip down to just vocals and a guitar, and was a great way to get a sense of how splendid their voices are by contrasting it with their main performance. Fans followed Wage War from the acoustic set straight to the main stage, and stayed until the absolute end of their set, something that has become highly unusual at such a large venue with stages that kick off in congruent order.

Lilith Czar charmed the Earthday Birthday crowd to the sheer delight of thousands of fans. What started out as a sound person’s worst nightmare—they blew a circuit twice—became an opportunity for her to show a different side to fans—her great sense of humor. During the pause she smiled, asked for someone to tell some “bad dad jokes,” which were in fact bad. Czar also invited a fan upfront to sign his shirt as it was his birthday. After the brief pause, she started the set over and fans went crazy. Czar’s vocals were on point, and she can captivate an audience and engage them no matter the size of the crowd. One unidentified fan, near the back of the thousands that had wandered over from another stage said, “I didn’t know who she was before I got here, but I sure do now. Love her.”

Ice Nine Kills has become one of the most talked about bands, catapulting straight to the top. Love them or hate them, the band brought a tremendous performance to the Turn It Up stage at Earthday Birthday. Their show, a true homage to the slasher film, included beheading a crewmember with an axe and stabbing a Jamie Lee Curits look alike with a Michael Myers knife. Ice Nine Kills has fantastic music, a huge fan base, and are musically tight live. Their performance was seamless, except for the moment, during their opener “Welcome to Horrowood” when security failed to reach a crowd surfing girl in time to catch her and vocalist Spencer Charnas hopped off stage to do it himself. He never stopped singing and never missed a note.

There is no doubt that Motionless In White can deliver a hard-hitting and enthusiastic performance, but they weren’t ready to stop at just that. Every time they step on stage, they connect not just with the crowd, but also personally with every single person there. Even though it was a bright and sunshiny day, neither the heat nor the previous sound issues seemed to plague them. Within mere moments of the start of their set, the clouds closed above the stage, giving the crowd a much needed respite from the heat, which brought back the energy from earlier in the day. When Chris Motionless hopped from the stage and walked by singing to the crowd face-to-face, the joy of live music coming back to its pre-COVID days became a reality. Even the sun came back out and lit his entire path. Girls were screaming, crying, and when he stopped for a moment for selfies, blissful. Motionless in White was perfection.

Thrice is a solid, hard rocking, and talented band, and to make the point even more solid, Spencer Charnas of Ice Nine Kills stayed side stage to watch because he is a fan himself. With a huge number of people leaving their spots across the venue to make their way over to see Thrice, this was a show is worth seeing. Musically, Thrice is fantastic. Their use of the stage and fan engagement was spot on, and their melodic songs and energy is a great combination.

Earthday Birthday’s main stage can be brutal. The Florida sun is not kind, and with the direction the stage faces, artists get the brunt of it during the late afternoon sets, but that didn’t have any effect on the energy and crowd engagement from Black Veil Brides. From the moment they stepped on stage, they performed hard and genuinely seemed to be having a great time. At Earthday Birthday, the sets are quite a bit shorter to allow this family friendly, one day rock experience to stay with the traditional format and offer fans the opportunity to see many artists. Black Veil Brides was a must see. The energy they gave out to an estimated 10,000 plus people was returned tenfold, and their stage presence seems to get better each and every time.

Godsmack is a band that always seems to be blessed with the best sound, lighting, weather, and crew. Most importantly, they are blessed with the best musicianship. Much like times previous, Godsmack delivered a flawless performance. If you didn’t know they were playing live in front of 15,000 screaming people, you could close your eyes and hear the recording note for note. During “1000HP,” the pyro did not let up, and that got the crowd up on its feet singing back as loud as they could. Godsmack is always a great show, but never more important than this official, triumphant return to normal. The entire band looked and sounded fantastic. Frontman Sully Erna even shared that he had turned 54 earlier this year and was bragging on the Cindy Crawford beauty products as his secret weapon for looking younger. Product endorsement or cute jokes, it didn’t really matter, the crowd loved him and he loved them back.