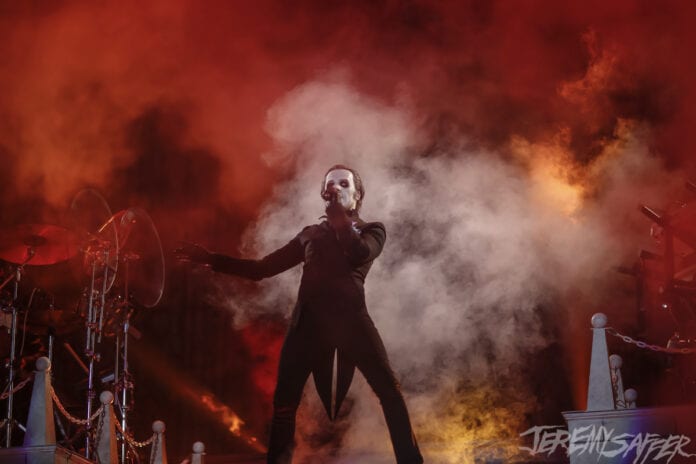 Love them or hate them, there’s no question Ghost has quickly become a massive force to be reckoned with. The question, however, on both sides of the Ghost fence is, “Are they big enough and ready for arenas?” Last year Ghost tested the waters, jumping up from a theater show to an arena show for three dates of their tour at Barclays Center in New York, The Forum in California, and Place Bell in Montreal. The results were undeniable.

Now, Ghost has brought the band’s ritual (concert) to the DCU Center in Worcester, MA, home to the Rock and Shock festival, and just across the street from the legendary Palladium, home of the New England Metal and Hardcore Festival. Worcester is a town full of heavy music history, and Ghost arrived to a massive crowd of over 5,000 fans ready to witness the band on the biggest stage and venue in the area.

After an excellent photo shoot with current leader Cardinal Copia just before the show (look for the photos along with an interview and contest in the coming weeks), it was time for Ghost to take the stage. With a black curtain in front of the stage, the Prequelle intro “Ashes” starts up to a packed and roaring crowd. The curtain drops to reveal the nameless ghouls and ghoulettes that kick things off with their Grammy nominated “Rats.” Cardinal Copia appears on stage just as the vocals kick in with all the swagger and charm he’s become known for in his live performances since being named the successor to Papa III.

The stage set was similar to what fans may have seen on previous tours, but they have added platforms on both sides, as well as a runway out from the middle of the stage of which the band used frequently. But that’s not all they added. During the Prequelle era, they expanded to a bigger band with eight members on stage—three guitarists, drummer, bassist, two keyboardists/multi-instrumentalists, and, of course, Cardinal Copia, along with an appearance by Papa Nihil on sax.

The set mostly pulled from the most recent two albums Meloria and Prequelle, and by the third song “Faith,” it was clear that the band had a few extra surprises for everyone…pyro! Something that could not have been done in the smaller theaters they had been known for inhabiting, but perfectly shows why Ghost belongs in arenas.

Having recently released a sold out 7-inch double single, Seven Inches of Satanic Panic, they first played “Mary on a Cross” before going into an extended “Devil Church,” with a guitar face-off between the nameless ghouls. Ghost isn’t afraid to inject some humor into its shows with the stage banter of not only Cardinal Copia but also the nameless ghouls. After battling on guitar back and fourth for some time, the band went into its Grammy winning song “Cirice” to a crowd signing along loudly.

The band then went into another instrumental, “Miasma,” with the fan favorite moment of Papa Nihil joining the ghouls on stage for his sax solo before being carried away by two crew members. The Cardinal returned to the stage in a white outfit, and while speaking to those in attendance, a member of the audience handed him a rose, which he graciously accepted to comedic effect.

After a few more songs pulled from older releases and a change into the black outfit from the first announcement and appearance of Cardinal Copia, they went into “Year Zero,” which was chock full of pyro and the only time during the set where fire was used. Cardinal Copia then took the back of the stage to lead a massive sing-along to “He Is” with Papa Nihil looming behind him in the form of the stage backdrop.

With all the charisma, charm, and humor that one would expect from Cardinal Copia, he walked to the very front of the runway to ask the audience a few important questions. “Do you want to hear a really heavy song? It will make your asses wobble. So I ask you, do you like to have your asses wobble? It’s so heavy it will not only wobble your asses, it will also tickle your taints. Do you like that? Do you like to have your taints tickled?” They then kicked off a green soaked “Mummy Dust,” which culminated with an explosion of confetti and mummy dust—aka Ghost dollars.

The band then went into their most recent single “Kiss the Go-Goat” and ended with two favorites from their past two records. “Dance Macabre” displayed a very colorful stage, as well as another explosion of confetti, but most importantly showed off the Cardinal’s dance moves as he glided from one side of the stage to the other and back again like a satanic Gene Kelly. They finished up with one more fan favorite before showering the audience with picks, sticks, and more mummy dust as they exited the conquered stage of The DCU Center.

Only a very small list of bands in the metal and rock world are big enough to headline arenas. Ghost proved there is no doubt that they are the next big arena band. In 10 short years, the band has gone from small clubs to beautiful theaters and now arenas. Few bands get to this level, fewer remain at this level, but Ghost is only going to get bigger and better. With a full stage, great production, and thousands of fans ready to witness the band at every stop, Ghost will have no shortage of arenas ready to welcome them to perform their rituals to their loyal masses.

Check back next week for an exclusive interview with Ghost mastermind Tobias Forge to read all about what the future holds for Ghost.

Prequelle is out now on Loma Vista Recordings