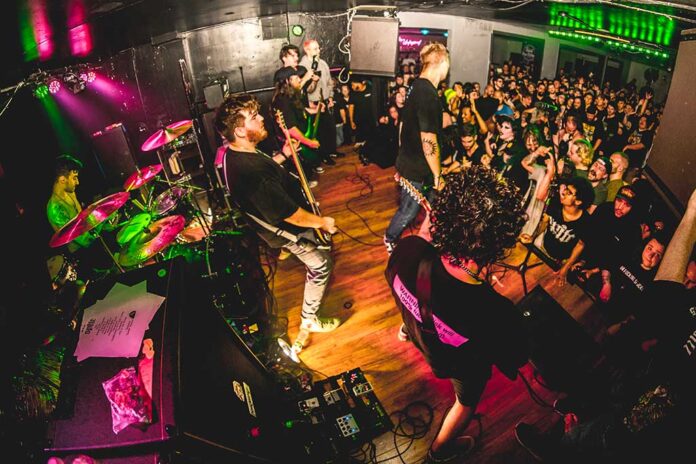 SPITE and BOUNDARIES with Vatican and Bodybox
Worcester, MA
The Webster Underground
06.12.22

Pure mayhem. That is the only way to describe what occurred at The Webster Underground on Sunday, June 12. With a lineup of Bodybox, Vatican, hometown band Boundaries, and headliner Spite, fans were eager to get into the venue to begin their night of heavy music, friendship, and chaos.

Bodybox was first to the stage. The Florida group played a quick but aggressive set with themes of gore and drugs. The deep growls and heavy riffs got the venue moving in pace with the music. The band took a moment out of their set to dedicate a song to the late Trevor Strnad of The Black Dahlia Murder and spoke about the importance of mental health as well as reaching out when you need help. An important message to spread, because you never know who needs to hear that they are loved and supported. Bodybox brought a brutal set with a positive message, the perfect way to get the evening started.

Vatican, all the way from Georgia, was ready to keep the heaviness going. Mike Sugars (vocals), Tom Lovejoy (guitar), Nolan Mobley (guitar), Jonathan Mackey (bass) and Josian Soto-Ramos (drums) brought their own elements to the performance. Mackey’s facial expressions matched the intensity of the music, while Lovejoy brought incredible energy to the stage, spinning, screaming with the crowd and stage diving with his guitar. They played “Absolute Reality”(Become a New God – 2021), a fast paced song that kept the fans amped up for heavier mosh pits. Vatican was celebrating their new album Ultra, which can only be described as post-modern metal.

Now was the time everyone was waiting for. Being back in their hometown of Hartford, Connecticut, Boundaries was ready to take the stage. The venue was packed out with friends, family, and even old members of the band all ready to support this talented group. The moment vocalist Matt McDougal touched the mic, pure chaos broke out. The entire venue became a mosh pit, there were stage divers everywhere you looked, and fans screaming lyrics with McDougal. Nathan Calcagno (bass), Cody Delvecchio (guitar), Tim Sullivan (drums), Cory Emond (guitar) brought nothing but passion to the set, each note speaking through their movements. Sullivan’s facial expressions added to the intensity fueling the fans’ energy that much more. Midway through the set McDougal brought on the bands previous bassist Zadak Brooks to play a song with them, making it a nostalgic performance for those who have been following the band since the beginning. The group played Get Out, and Behind the Bend (Your Receding Warmth – 2020),and this is when the venue broke out into absolute mayhem. Fans flooded the stage to sing with the group to the point that bodies started flying off the stage, the mic stand was taken out into the crowd, and even McDougal was sent into an amp by an eager fan. The most incredible part is the joy that was on everyone’s faces. From the band to the fans and even the venue staff, the love in the room was shared by the tremendous energy and violence that occurred during their set. The support Boundaries received was beyond well deserved. After this performance it is undeniable that this band has nothing but success in their future. Boundaries is an absolute do not miss band.

The heaviness was not yet over, as headliner Spite was ready to close out the night. The California band played a powerful set full of heavy breakdowns, intense eye contact, and huge circle pits. Song by song, fans were all in screaming the lyrics and jumping to the beat. During “The Root of All Evil” (The Root of All Evil – 2019)fans chanted the chorus “I am (I am), I am the root of all evil.” The deeply intense vocals of Darius Tehrani mesmerized the crowd song by song. As the group went to close out the night, fans begged for one more song and Spit complied. They played an encore of “Kill or Be Killed” (Nothing Is Beautiful – 2017).The growls and fast pace of the song gave fans one last chance to let out every ounce of energy they had left. Chaos, mayhem, love, and support, this extraordinary lineup had it all.