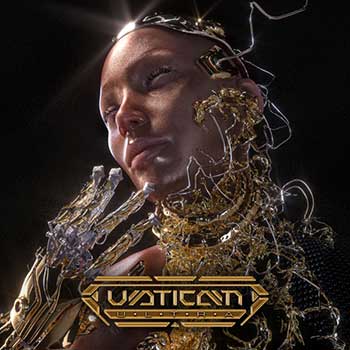 PUNISHING METALCORE: Prepare yourself before you press play on Vatican’s Ultra, because, holy shit, this band is not pulling any punches. Opener “Slipstream Annihilation” is shit-your-pants heavy, a stunning and visceral introduction to this Savannah, Georgia outfit that combines old school metalcore influences with flourishes of modern day genre technique. From there on, it’s a violent free fall down a rabbit hole of chaotic swirls of chugging riffs, vitriolic screams, punishing drum work, and even atmospheric melodic vocals, as introduced on “Reverence,” an early entry for Ultra’s strongest track. “Where Heavens Collide” tempers the pace a bit, while amping up that metalcore influence with towering atmospheric refrains swathed in big melodic hooks and destructive bars.

That tumble down the rabbit hole continues with the absolutely venomous “[ULTRAGOLD]” and the even faster paced tandem of “Decemeta” and “Uncreated Waste,” a pair of truly chaotic blasts that pay homage to the genre’s forefathers, each track clocking in at under two minutes. Vatican tosses in a classic breakdown towards the end of “Damage” for good measure, proving they are true students of the game. Many metalcore releases suffer from fatigue the deeper listeners get, but Ultra avoids that, thanks in large part to the penultimate “N.U.M.B. (Neutralize Under Maternal Bond).” Closer “Did You Ever Notice I Was Gone” starts out bizarre enough, but manages to round into form and close out things on a shattering high note.

On Ultra, Vatican knows who they are and spend the better part of these 14 tracks proving it. This album doesn’t stray too far to one side of the spectrum. It doesn’t go too heavy with atmospherics and clean singing, nor does it rely on straight-ahead heaviness, which often leads to bouts of repetitiveness with releases of its ilk. Vatican does all of those things and more on Ultra, which makes this such a strong record. This album manages to stick out in a genre that often produces many same sounding bands and records, which might be its strongest attribute. ~ Brian Campbell