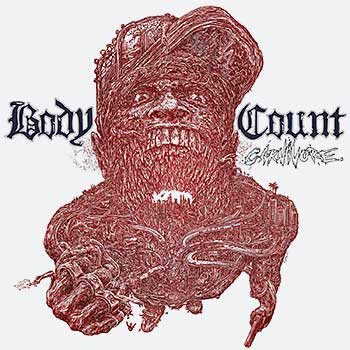 RAP METAL: The few people out there who never looked at Body Count as a novelty act whose notoriety was ignited and spawned from their association with and popularity of its frontman, one Tracy Lauren Marrow, are kidding themselves. The few people out there elitist enough to deny that the band’s self-titled debut from 1992 isn’t still enjoyable and packed front to back with catchy ditties and anthemic (and inadvertently humorous) odes to the underbelly of the urban experience are also kidding themselves. Also taking up membership in the kidding themselves department are those who claim that the last two Body Count albums (2014’s Manslaughter and 2017’s Bloodlust) haven’t been pretty good. They’ve overcome a lot, those kids from Compton. Half the band’s original lineup has been felled by various tragedies, the ravages of middle age are doing their ravaging, and Mr. Marrow continues to juggle a demanding career as a boob tube performer into his early 60s.

Another addition to the kidding themselves category are those under the impression that Carnivore is going to rewrite the tomes of originality to usher in a new, previously unheard sound and era of hip-hop inflected, punk-ish metal. Playing to the strength of Ice-T’s rap/rhyme cadences, Carnivore generally lays down a thunderous stomp accented by tinges of growling industrial (title track), furious crossover (“Point the Finger”), downcast doom/sludge (“No Remorse”), and even touching moments of elegiac Tool meets metalcore mournfulness (“Another Level,” “When I’m Gone”), but the majority still adheres tightly to four-on-the-floor accents. These serve to highlight the natural rhythmic catchiness of beats on the two and four, which in turn allow Ice-T to stick to the program with his singing voice, which is actually more him talking loudly and quickly than it is singing—a primo example being the band’s cover of “Ace of Spades.”

Getting guest vocal spots from members of Hatebreed, Power Trip, and Evanescence and minute phrasing twists offer some distinct and memorable moments, while there’s an undeniable catchiness to the shuffling thrash of “Bum Rush” and minor key Slayer-isms in “Thee Critical Beatdown.” Add to the program metalized covers of Ice-T’s own classic material “Colors” and “6 in Tha Morning,” and Carnivore makes for a more than satisfactory completion of the trifecta of enjoyable recordings recently issued by a band forever destined to be in the position of having to prove itself to the battle jacket crowd. ~ Kevin Stewart-Panko

THY ANTICHRIST: Wrath of the Beast