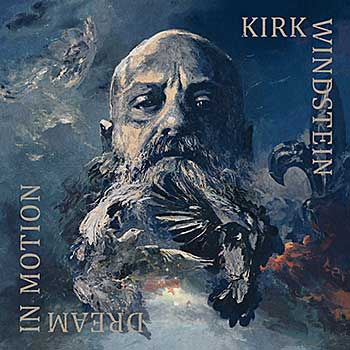 SLUDGE/DOOM METAL: Crowbar and Down guitarist Kirk Windstein put everything he had into his debut solo album Dream in Motion. As a pioneer of the NOLA metal scene, Windstein has stepped out on his own with Dream in Motion, as he handles all the vocals, guitars, and bass, while the drums are performed by longtime friend/producer Duane Simoneaux.

Compared to Crowbar and Down, there are only just a few similarities throughout Dream in Motion. Missing is Crowbar’s fuzzy, sludge elements, which are replaced with ethereal clean guitar work with loads of melodies, while the heavy breakdowns are replaced with more melodic doom elements decorated with bluesy, southern-fried riffs. Finally, Windstein’s gruff vocals are supplanted with lush dynamics and an ethereal vocal effect.

Closing out the 10 track album is Windstein’s fabulous cover of Jethro Tull’s “Aqualung.” Yes, it may seem like an odd choice at first, but it’s an absolutely killer rendition, especially since Windstein genuinely loves the 70s rock stuff to begin with. His vocals are a close fit to Ian Anderson’s, especially with the use of reverb, and although Windstein’s not a shredder, he does an excellent job of the extended guitar solo that accompanies the rest of the rhythm section, while the melodies are spot-on.

While there’s not much tempo change or diversity from track to track, Dream in Motion is a fantastic debut solo effort from one of the most celebrated doom/sludge performers in the scene today. ~ Kelley Simms