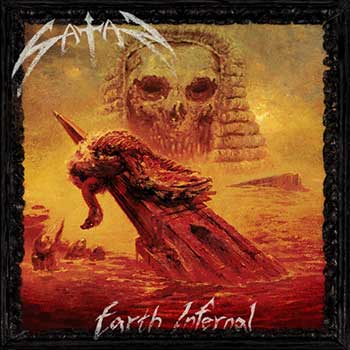 WEIGHTY AND OMINOUS HEAVY METAL: The world is fucked. If you can’t admit that to yourself, why not take a look at the fact that a heavy metal band from Newcastle, England, who lived through all the crap of the 70s onward (Margaret Thatcher, miner’s strikes, the Falklands War, mid-point proximity to the Cold War, the Battle of Britpop, supporting American mistruths in the Middle East, the collective dropped ball that was the UK thrash scene, that ridiculous London Eye, Brexit, etc.) is only now making a pointed point of pointing out how fucked we are. Climate change, denial of science, Joey Shithammer from down the block suddenly having all the answers because “he did his research”…these are the thematic ingredients driving the incendiary anger of Satan’s sixth album, their fourth since their comeback in 2013.

That’s not to say that Satan at their incendiary angriest sound much different than Satan otherwise. The veteran band continues to have and maintain their distinctive sound with punchy, unprocessed drums pounding out near boom bap beats as the basis for warm, natural guitars that actually sound like guitarists playing live as a team in a room together while Brian Ross summons the satin clad biker gods with his angelically grotty voice.

Earth Infernal is Satan doing things the Satan way. The album starts with “Ascendancy,” a bright and peppy speed metal tune sculpted by the NWOBHM, a bluesy shuffle, and classic rock sensibilities, same goes for the awesome “From Second Sight.” “Earth We Bequeath” showcases an epic and cursive style of rocking out before they go on to experiment with drastic tempo shifts and engage in prog level meandering on “Burning Portrait,” mixing a jingle melody with doomy thrash on “Twelve Infernal Lords,” tabla drums and Indian music micro-tonal melodies during “A Sorrow Unspent,” and “Luciferic” weaves some proggy 70s Genesis into a driving 80s banger.

What’s most encouraging and impressive about Earth Infernal is how Satan is able to inject their organic brand of metal with a vital urgency and existential dread while still coming across as remarkably infectious and toe-tapping. The graybeard quintet are truly masters of their craft, and if we can’t heed the warnings of “the smartest people on the planet,” we should at least defer to what artistic leaders have to say before it’s too late (even though it’s already too late). ~ Kevin Stewart-Panko