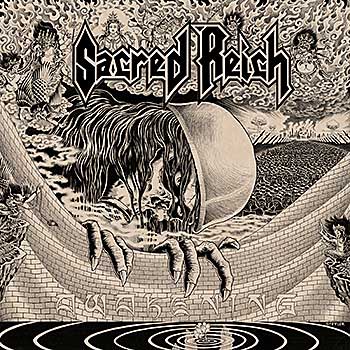 GROOVE/THRASH METAL: Twenty-three years is a long time to wait for a new album. Awakening is seminal thrash band Sacred Reich’s newest chapter in a long career. Sacred Reich was part of the burgeoning thrash scene of the early 80s, yet they were also apart from it. Hailing from Phoenix, they never got their just reward, seeming more like outsiders who did their own thing. What they did was unique within the thrash genre and it gained them a loyal fan base. Sacred Reich’s sound was thicker, meatier, and more groove based compared to most of the Bay Area thrash bands at the time, which included Death Angel, Testament, Metallica, Forbidden, Exodus, et al.

Sacred Reich has returned with its fifth full-length album Awakening, which is the band’s first full-length studio album since 1996’s Heal, and their first since returning drummer Dave McClain (Machine Head) and newcomer guitarist 22-year-old Joey Radziwill joined the band. The band is solidified by longtime guitarist Wiley Arnett and the ever-present bassist/vocalist Phil Rind.

On its eight well crafted tracks, the foursome aren’t reinventing themselves by any means, but they did stick to the tried and true later era Sacred Reich brand. The most interesting quality about the band has always been the distinctive vocals from Rind. He’s aged a bit, but he’s still in tip-top shape.

“Awakening” opens the album with a fiery, mid paced riff accompanied by a chantable chorus and some killer McClain drum fills that fades out the four plus minute track. The memorable chorus of “Divide & Conquer” will have you singing along, while the driving rhythm section of “Salvation” keeps things flowing nicely until “Manifest Reality” brings out a full-on thrash attack. “Killing Machine” possesses a killer snare drum march, while “Death Valley” drags a bit and kind of misses its mark until the politically charged lyrics of “Revolution” gets things cooking again and album closer “Something to Believe” contains a 70s/80s familiar rock sound. Even with the perfect 32 minute runtime, the songs are a bit too repetitive and a bit vapid. While Awakening isn’t the comeback that maybe a lot of diehard Sacred Reich fans were expecting, most will be super glad that the band is back. Hopefully, there’s a lot more of where this came from in the future. ~ Kelley Simms

GLORYHAMMER: Legends from Beyond the Galactic Terrorvortex﻿