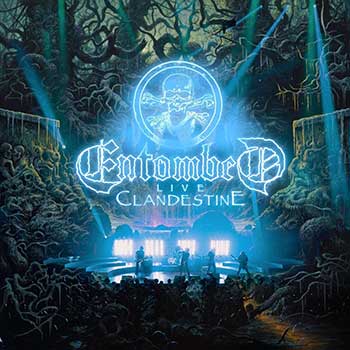 DEATH METAL/CLASSICAL: Years before pioneering what would eventually define the oft-maligned death ‘n’ roll subgenre, Sweden’s Entombed stood at the forefront of death metal’s insurgent rise in Europe. Influenced by the speed-driven pugnacity of hardcore and the wanton extremity of bands like Napalm Death, drummer/guitarist Nicke Andersson had formed Entombed in 1987, along with guitarists Alex Hellidand and Uffe Cederlund. Their 1990 debut, Left Hand Path, set forth the blueprint for Scandinavia’s unique death metal strain—a dizzying volley of concussive blastbeats, growling buzzsaw guitars, and a subversive contempt for the polished and formulaic direction of mainstream heavy metal. But it would be Entombed’s 1991 follow-up, Clandestine, that would see the band fully realize its vision.

In 2016, Entombed commemorated the record’s 25th anniversary with a two act celebration, which they’re now releasing as a live album in standard digital, CD, and vinyl formats. In the first act, Sweden’s Malmö Symphony Orchestra and Choir arrange and perform a symphonic version of Clandestine, with Andersson, Hellid, and Cederlund sitting in accompaniment. It’s hardly surprising that a band known for genre smashing experimentalism would reimagine their seminal work this way, and how much one enjoys it depends entirely on their willingness to turn on to something new. While superficially, such an approach smacks of aging rock star indulgence, in fact, the orchestral reworkings of songs like “Evilyn” and “Blessed Be” feel haunting and oddly natural, as if death vocals were always a part of the symphony. Act two sees the original members joined by former Morbus Chron members Robert Andersson (vocals) and Edvin Aftonfalk (bass), whereupon the band tears through Clandestine from top to bottom, with all of the might and brutality the material requires. They stick relatively close to the originals, and as the entire production occurs in a concert hall, the lack of moshing and beer-sodden mayhem might strike some as too reserved for their tastes. But to hear these timeless tracks revisited in such a unique format is an experience well worth checking out. ~ Joe Daly