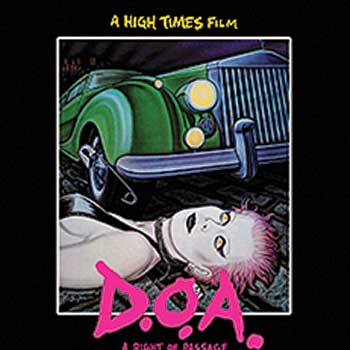 D.O.A.
A Rite of Passage

BIRTH OF PUNK: On the heels of a limited theatrical release, Lech Kowalski’s classic punk documentary D.O.A.: A Rite of Passage has been restored and is just as important as it’s ever been. There’s a muted, omniscient narrative at work thanks to Kowalski seemingly keeping his subjects at arm’s length at all times. Bordering on the voyeuristic, the film speaks to just as many punk adversaries as it does to punk mainstays, eschewing any sort of bias in favor of painting a complete picture of the adolescence of the then burgeoning genre. It begins innocuously enough, interviewing enthusiastic concertgoers at a Sex Pistols show, but by the end of the film, the attitudes on display become increasingly aggressive, and therefore concerning. A sullen teen lies on the ground, sadly musing on the excessive power that the police wield over local youth, while elsewhere a man grabs a woman in a chokehold for attempting to hit him. It’s scenes like this, as well as an uncomfortably awkward attempt at interviewing Nancy Spungen and a near unconscious Sid Vicious, that lend A Rite of Passage its true power. It’s not glorifying punk, nor is it condemning it. It’s simply painting an unflinching portrait of a volatile scene at its onset, and as such, exists as a perfectly preserved time capsule. ~ Tyler Davidson