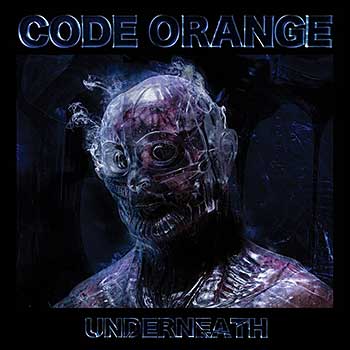 METAL HARDCORE AND MORE: For over a decade, Code Orange has redefined the genres of hardcore and metal, pushing themselves and their contemporaries to new heights. The band has fascinated the masses with their melding of genres and bending the conventions of hardcore, and their latest release, Underneath, is Code Orange’s most accomplished release yet.

Underneath was produced by Code Orange’s Jami Morgan and Nick Raskulinecz with co-producer Will Yip and features programming by Chris Vrenna, making it a mammoth of a project. This record proves to be one of Code Orange’s most prolific albums, and its ascendant quality borders on horror, as the guttural growls pierce the stratosphere. Where this record excels is in the marriage of industrial inspired beats and hardcore tendencies, and the aggression woven into each track creates a cohesive body of work. Its mixing deserves the upmost praise, as Yip and Eric “Shade” Balderose seamlessly blend the varying genres together. Underneath sets the blueprint for what initially inspired Code Orange and where we can expect to see them in the future.

The track “In Fear” is incredibly textured and reaches the outer limits with its underlying techno melodies and metal ambition. The star of the show throughout the album is Reba Meyer. Her vocals are ferocious and enchanting, giving balance to the overall structure of Underneath. “Sulfur Surrounding” takes nods from the early 00s alternative and metal, taking us on a nostalgia trip.

Code Orange has many accolades under its belt and is the only metal band to play the potentially rescheduled Coachella this year. It’s a major step for Code Orange’s career, and Underneath is the record to set the band up for superstardom. ~ Konstantina Buhalis