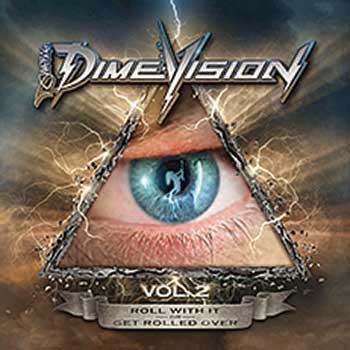 DIMEBAG DARRELL
Dimevision Vol 2: Roll with It or Get Rolled Over

GROOVE METAL MASTER CLASS: There is a void in the hearts of the metal community that no amount of metalcore or djent can fill. The tragic slaying of iconic guitarist Darrell “Dimebag” Abbott shattered the scene, but his memory lives on through his masterful guitar in the Pantera and Damageplan catalog. In 2006, fans were afforded a rare glimpse into the world of Dimebag with Dimevision, a duel DVD/CD that compiled hundreds of hours of footage from the mid 80s to his later years. Now, Metal Blade has released the follow-up in Dimevision Vol 2: Roll with It or Get Rolled Over. A collaboration between Dimebag’s longtime girlfriend Rita Haney and close friend Daryl “Bobby Tongs” Arnberger, the DVD includes five previously unreleased demos. From the twangy Southern stylings of “Twisted” and “Whiskey Road” to the aggressive chugging groove metal of “Ain’t No Struggle,” these are hidden gems that are sure to be savored by any fan of one of the true pioneering guitarists of all time. It should come as no shock that the guitar chops of Dimebag are in fine form through each and every cut. The funky, George Michael inspired “Time” is an addictive and unexpected pleasure, and a stark contrast to the relentlessly heavy “Let’s Go.” This is Dimebag at his finest. A must own in every sense. ~ Dillon Collins