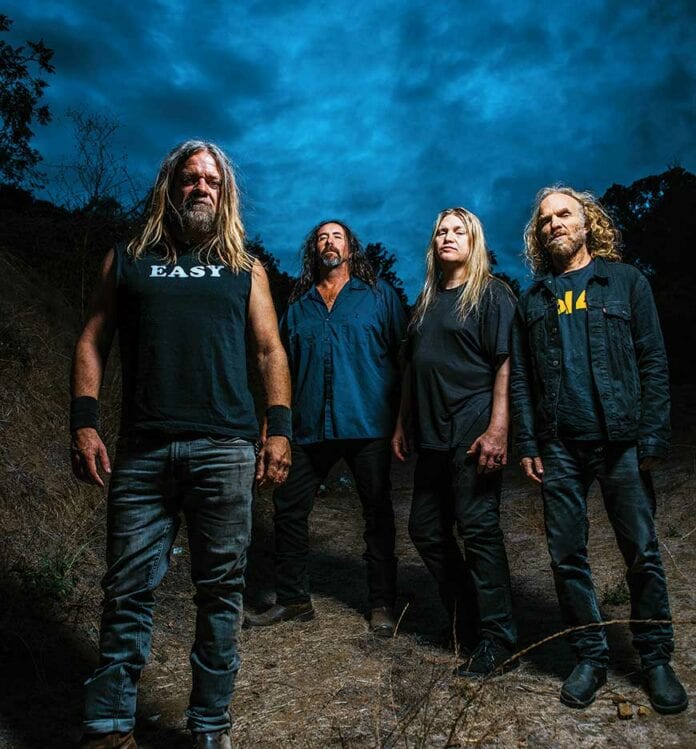 Though Pepper Keenan rejoined Corrosion of Conformity back in 2014, it’s taken some time for the band to drop a new record. With No Cross No Crown, the first Corrosion of Conformity release to feature the vocalist since 2005’s In the Arms of God, they have returned, and true to form, the band is once more tapping into the Southern grooves that have long stood as its stock in trade, but without aping any of the many classics in its catalog. We caught up with Keenan to take a look behind the curtain.

You’ve been back playing with Corrosion of Conformity for a few years now. When you first rejoined, did it feel like you picked up where you had left off?
We kind of hedged our bets on that. We said, “Let’s go play some shows before we really dig into this and make a thing of it,” just to see where everybody’s head was at. Of course, you get back in there and it’s high school reunion kind of shit. And really, it was very simple. We just jumped right back into that old space and started having fun. I’ve got to say it was pretty honest. You see bands getting back together and doing some reunion bullshit tour, but I didn’t want to be that guy. I know I’m old now, but that still didn’t make me that guy. So, we played some shows, that went cool, and we said, “Let’s write some music, go back to where we came from, and keep it real simple.”

At what point did you start writing for the new record, No Cross No Crown?
We had riffs here and there that we kept in a riff log, but we pretty much went into it with a blank slate. Nuclear Blast gave us a record deal, which meant we were in a really good position, because we weren’t having to drag ourselves around hunting for a record label, and really, that’s the best label in our world. Having them come to us and say, “You guys want to make a record with us?” We were like, “Yep, done!” That gave us some freedom to breathe a little bit. So, getting back to your question, we toured for nearly two years with no new record, nothing new to play, just doing it off the back of old bullshit, and that was great. In that time we really got to figure things out and get into a groove together, see where our heads were at, and when it comes down to it, we ran out of places to play (laughs). So, we’re there saying, “Okay, I guess we should probably go make a record then!” So, we went back into the studio and teamed up with John Custer at the helm, who produced a whole bunch of our records, and it was weird stepping into a room and saying, “Okay, who’s got an idea?” A year later, we have No Cross No Crown, and I’m very happy about that.

Did it feel like you were tapping into ideas from older records while working on it, or did it all feel very fresh and new?
It was just the next step in our evolution. I can’t really say we tried to do this or that. We were just doing what we do, but evolving a little bit without being too sophomoric about it. It felt very real to us, and because we were essentially tracking what we did on the spot, there was some challenge to it.

“IT WAS THAT SIMPLE, AND ONCE WE HAD THAT TITLE, WE HAD A MISSION.”

How would you describe the sound of No Cross No Crown?
A big ass fucking epic rock record. I enjoy big records. Some of my favorite albums take a long time to get where they were going. We wanted this to be an album, not just a bunch of songs in the same key, so there’s some varied stuff on there.

Was it an easy record to sequence once you had all the tracks done?
It was a little difficult because we had some things that jilted gears. There would be some crazy Southern shit right into some tearjerking kind of thing, but we would look at that and think, “Okay, well, let’s put an interlude in here, separate them so they can both really stand on their own.” We wanted it to flow, and we ultimately went through five or six different sequences, but I knew it had to start with our intro track and then straight into “The Luddite.” And I knew it had to end with “A Call to the Void.” It was just a case of tightening things up between the two.

The latter track you mentioned is quite epic. Was that one a lot of work to realize?
Yeah. Once Mike Dean [bass] wrote the riff, it went through several different variations, and the song actually got a lot bigger than we thought it would be. In the end, we just had to go with it, let the song be what it was, even if that meant spending a lot of time on it.

Did every track you wrote make the record, or do you have anything leftover?
There were a couple of tracks we didn’t use, but the thing is when we started writing the music we actually had the album title already. We had that before one minute of music had been written, and when you know what the album is called and you want to write an hour of music that fits into that name, you need to make it make sense. So, it wasn’t like the songs we didn’t use were bad, they just didn’t fit with what we were going for. And when you work that way, you start to feel like a chess player, having to strategically think things through, about 10 games at a time.

Where does the title, No Cross No Crown, come from?
We played a show at a decommissioned church that had been turned into an arts center or something somewhere in England. I forget what town it was in. There was a stained glass window in the dressing room, which I guess was the area that the priests would hang out in, back behind the pulpit, and at the bottom of this was a plaque or something saying, “No Cross No Crown.” Me and Woody [Weatherman, guitar] looked at it and said, “That should be the name of the record.” It was that simple, and once we had that title, we had a mission.

Is this the first time you’ve started working on a record with the title in place first?
Actually, no. America’s Volume Dealer [2000] was in place before we started that record, too. And you can see how that would then inspire the music we wrote for it.

Where are you coming from lyrically on No Cross No Crown?
It runs the gamut. I’m really not one to make things more complicated than they need to be, and it’s mainly observations of existence. It’s the things I think and I see—some things are good, some things are bad, war is crazy, politics is crazy. It’s about just trying to be a good person and see your way through all of it. And that means I’m also not just singing about titties and beer (laughs).

What was the hardest aspect of making the record?
Staying in tune? (laughs) Me and Woody beat the shit out of those fucking guitars. Really, it’s the same as every record—trying to get everything that’s in your head onto tape, or a hard drive or whatever you’re recording onto, is a weird thing to do. Making music, it’s imaginary stuff. It’s not real until you hear it back as a finished song. But then, once it’s done, it’s suddenly not yours anymore. You give it to the label, and it’s gone. And letting it go can be a strange thing, too, but you have to.

Do you have many eureka moments while you’re in the studio, when magic really happens?
Absolutely! If you’re not having those, you’re in fucking trouble. You never know what is suddenly going to take you on a tangent or this whole other direction, and you have to embrace it, you have to let it happen and be what it is. That’s one of the upsides of making the record the way we did, because we could go on those tangents, we could let the songs happen and capture them in that moment. We’ve had acoustic songs turn into heavy monsters and vice versa because a moment inspired that change, and then we’d just roll with it. You need to be reined in here and there to make sure you don’t go too far from the trail, but that’s one of the things that John Custer is so good at. He knows when to let us roll and when to pull us back. Also, sometimes you’ll come up with something and it sounds great, but suddenly you’re thinking, “How the fuck are we going to play this live?” But then you listen to a band like Queen that does all of these amazing things to their songs in the studio—and obviously I’m not saying we’re on the same level as Queen, at all—but when they played those songs live, they had to change them up to make them work. I’ve always admired that. You can’t worry too much about how you’re going to do it live. You’ll usually find a way to make it work.

KILLER BE KILLED: On The Warpath