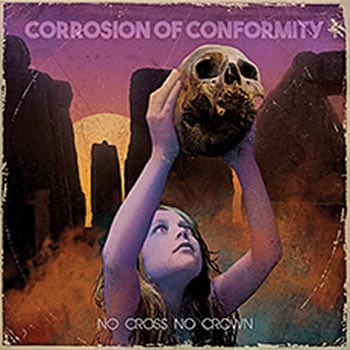 CORROSION OF CONFORMITY
No Cross, No Crown

SOUTHERN-FRIED RIFF MACHINE: Corrosion of Conformity’s first record for its new label Nuclear Blast, No Cross, No Crown, is one hell of a smoke show—an absolutely ripping collection of songs that proves that this southern-fried metal act still has plenty of gas left in its creative tank. No Cross, No Crown is easily the heaviest and most energetic album the North Carolina based band has unleashed in years, one that possesses a very memorable songwriting core and a fire in its belly. It isn’t so much as if Corrosion of Conformity has tinkered at all with the sound that made them ambassadors for the Sabbath worshipping, riff machine set. If anything, No Cross, No Crown just amplifies everything the band’s fans have loved until now and ensures that there is no fat to trim—every song here delivers its absolute best. The album’s dirty but listenable production guarantees that Pepper Keenan and Woody Weatherman’s guitar work shines through, while Keenan’s vocals also possess tons of charisma and vigor. Not since In the Arms of God (2005) or Wiseblood (1996) has there been a Corrosion of Conformity album with vitality comparable to No Cross, No Crown. So, needless to say, the band’s fans are in for a serious treat when this one drops. ~ George Pacheco