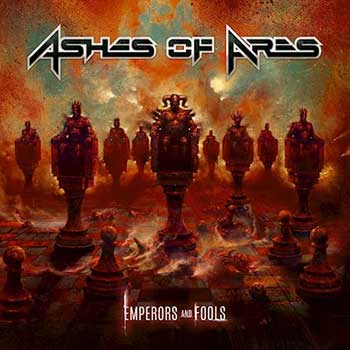 ASHES OF ARES
Emperors and Fools

HEAVY POWER METAL: Nine years after forming Ashes of Ares, ex-Iced Earth alumni—vocalist Matt Barlow and bassist/guitarist Freddie Vidales—return with their third full-length album, Emperors and Fools. This album sees the duo take the darkness and aggression from their previous album, 2018’s Well of Souls, to epic proportions. Ashes of Ares is a true collaborative effort between the two members, evolving and refining each track as a team.

Naturally, there will be millions of comparisons to both members’ former band, especially Barlow’s defining vocals. However, the musical compositions were mostly written by Vidales, who has a different guitar technique.

The 12 well balanced tracks flow nicely, containing fast, heavy, pummeling anthems (“By My Blade,” “Throne of Iniquity”) to somber, melancholic, emotional compositions (“Emperors and Fools,” “What Tomorrow Will Bring,” “Gone”) to mid-paced galloping pieces (“I Am the Night,” “Our Last Sunrise,” “Where God Fears to Go”). “A City in Decay (Intro)” opens the album much like Well of Souls does with a symphonic instrumental segment. Its surging and brooding rhythm builds in anticipation for the listener, leading into the first song proper, the Iced Earth-esque “I Am the Night.” “Primed,” which wouldn’t have been out of place on Iced Earth’s The Crucible of Man album, is written to Barlow’s mighty vocal strengths, including his glorious harmonies and distinctive melodic croons. The epic 11-plus minute album closer “Monster’s Lament,” featuring former Iced Earth vocalist Tim “Ripper” Owens, sees the long imagined duet between the two ex-Iced Earth vocalists. The duality of the two singers is top-notch. In fact, most of Barlow’s lyrical concepts in the past deal with the dichotomy and duality of human emotions—good and evil, black and white, night and day, etc.

Produced by Ashes of Ares in each members’ own home studios, with mixing and mastering by Byron Filson at Villain Recording, there’s a nice balance between raw, dark, and aggressiveness without sounding too over produced or too polished. Ashes of Ares’ genuine approach to the genre gets high marks, but they will forever be compared to Iced Earth. Whether that’s a good or bad thing in the fans’ eyes, Ashes of Ares can definitely stand on its own two feet. ~ Kelley Simms