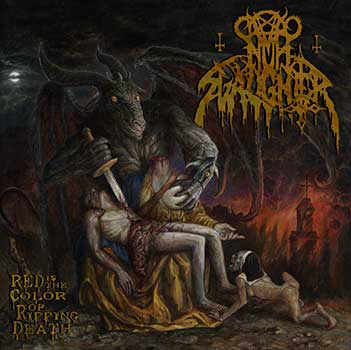 NUNSLAUGHTER
Red Is the Color of Ripping Death

RAW, GRITTY BLACKENED DEATH METAL: Nunslaughter is one of the most revered and well respected cult extreme metal acts on the scene today. It’s a name you’ll never forget. The Cleveland, OH horde has been highly prolific since its 1987 formation. Mostly known for their abundant amount of EPs and split releases (45 and 67 respectively!), Red Is the Color of Ripping Death is only the band’s fifth full-length release in its 34 year existence and its first in seven years.

The band’s raw, gritty blackened death metal sound—à la black ‘n’ roll in the vein as Destroyer 666 or Midnight—packs a vicious punch on its 14 compact tracks. Some tracks barely reach the three minute mark, while one doesn’t last even one minute, making every track the perfect precision-like composition. Consisting of mostly mid-paced, menacing headbanging tracks with memorable riffs, there are some speed/thrash metal elements spread throughout the album. There are also some groove based rhythms as well as staying within death metal territory, while a doom or black metal vibe in the vein of Venom, Celtic Frost/Hellhammer, and Possessed also makes its mark. The harsh, venomous barks of Don of the Dead have never sounded better.

Explosive opening track “Murmur” sets the tone immediately, consisting of gritty riffs, a relentless rhythm, vicious vocals, and the band’s trademark evil wall of sound. Lasting only a minute and a half, it packs such a viscous wallop, as does the rest of the compact tracks that follow. “Broken and Alone” is a raging beast, the menacing “Banished” is pure evil, while the grand declaration of “Red Is the Color of Ripping Death” is a magnificent war cry of a tune. Nunslaughter’s anti-Christian themes on tracks “Annihilate the Kingdom of God,” “Beware of God,” and “The Devil Will Not Stray” don’t wander too far from the band’s past repertoire, while the doomy “Casket Lid Creaks”—one of the highlights of the album—and the 53 second finale, “Below the Cloven Hoof,” cap off this ripping 35 minute affair.

The little details throughout the album are so terrifyingly good. For example, the anguished fade out scream on “Black Cat Hanging,” the fist thrusting, throat ripping chorus on the title track, and the mammoth riffing of “The Temptress,” making Red Is the Color of Ripping Death one of Nunslaughter’s best albums to date. ~ Kelley Simms