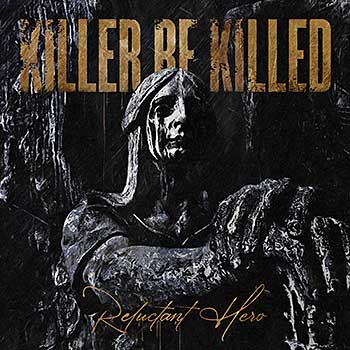 GROOVE METAL/MODERN ROCK: While Killer Be Killed’s 2014 self-titled debut record was praised by fans and critics alike, Reluctant Hero undoubtedly tops it. Featuring guitarist/vocalist Max Cavalera (ex-Sepultura, Soulfly), vocalist/guitarist Greg Puciato (The Dillinger Escape Plan), bassist/vocalist Troy Sanders (Mastodon), and drummer Ben Koller (Converge, All Pigs Must Die), Killer Be Killed sounds much more like a band this time around instead of just a supergroup or a project.

The triple threat combo of Killer Be Killed’s three distinctive voices is pure magic on Reluctant Hero, proving that these three entities work extremely well together. On its 11 tracks, there’s a great mixture of all the members’ main bands, with Troy giving the verses a hefty Mastodon vibrancy, Greg with a voracious Dillinger Escape Plan familiarity on the choruses, and an aggressive Sepultura/Soulfly combo on the Max sung bridge/pre-choruses. But when all three voices are combined on “Inner Calm from Outer Storms,” all hell breaks loose in the most glorious of ways. The amazing drumming from Ben Koller is also equally impressive. His slamming tom patterns on “Dream Gone Bad” and “Inner Calm from Outer Storms” and his tasty snare rudiments on various tracks will certainly perk up the listener’s ears.

From the opening groove-core track “Deconstructing Self-Destruction,” to the innovative tribal drum pattern of “Inner Calm from Outer Storms,” to the frantic punk/hardcore vibe of “Filthy Vagabond” and “Animus,” to the traditional metal assault of “Left of Center” and the title track, Killer Be Killed has crafted each track into engaging and interesting compositions that ebb and flow, while keeping the listener on the edge of their seat in anticipation of trying to figure out which way each track will twist and turn. However, the band really knocks it out of the park on album closer and title track. Although it may be a bit off-putting to some fans at first with its emotive melodies and heartfelt vocals, it’s a totally gorgeous song. It’s also probably the most diverse song each member has ever written in any of their illustrious music careers.

Once again produced, engineered, and mixed by Josh Wilbur (Lamb of God, Megadeth, Gojira), the bottom end thumps, the metallic edge is menacing and heavy, while the melodic parts and soaring vocal harmonies are crisp and sharp. Given that all the members of Killer Be Killed are fully invested in their main bands and it took them six years to release this record, we’re not sure where Killer Be Killed will end up in the future. However, at least we currently have plenty of time to enjoy the fantastic Reluctant Hero. ~ Kelley Simms