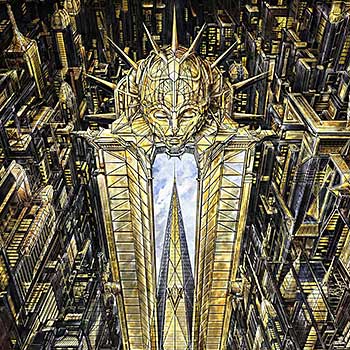 CHAOTIC AVANT-GARDE METAL: Many bands deviate from the traditional styles of metal and create their own path in extreme music. However, very few bands accomplish this and even fewer bands do it well. Imperial Triumphant is the exception. Their chaotic and avant-garde sound is hard to reduce to a single genre. They are truly authentic, combining their experience of living in New York and the myriad of music styles that the trio loves. All of this is perfectly blended into an artistic yet disturbing manner, enticing anyone who listens to the band.

Imperial Triumphant’s Alphaville is a masterpiece. Being the band’s fourth full-length album, Imperial Triumphant continues on their warped journey, delivering terrifying music that snatches up the listener. The addition of non-metal elements, such as a barbershop quartet, taiko drums, and intercom speaking, makes this album more bizarre and intriguing.

Alphaville starts out with “Rotted Futures,” and the song carries slowly. You first hear some background effects with hitting cymbals and what sounds like a siren type of noise. Guitar, bass, and drums meet with the background effects and a simple melody, until the song takes a dark turn, crashing down with vocalist/guitarist Zachary Ilya Ezrin’s commanding vocals. The song picks up in speed and gets weirder with stabbing guitar parts and vocals. Choir vocals chant along with Ezrin, contrasting between the beautiful and the chaotic.

The next song is “Excelsior,” and this is definitely one of the best songs on the album, worthy of the title. It’s catchier than others on the album. Serpentine bass lines carry you throughout the entire track, cut in with fast drums and chaotic guitars. Melody starts to mix in with the insanity, developing a little bit more of a movement rather than just pure destructive.

But c’mon, we know Imperial Triumphant. They’re going to randomly throw something strange in the song. And sure enough, they shove in what sounds like a speaker on the intercom (like what you hear at the grocery store) with some elevator-like music in the background. Then, the song randomly cuts into an effects heavy intense part mixed with the same bass from before. The song goes back to normal (or as normal as an Imperial Triumphant song gets) with the same spastic guitars and drums.

The next song, “City Swine,” is more melancholy than the rest of the tracks. It starts with a slow but eerie guitar melody, heavy bass, and complex drumming. As the song progresses, it gradually becomes more brutal, with Ezrin mixing some higher vocals in the chorus.

Toward the middle of the song is where the taiko drums come in. Even when watching the footage of Meshuggah’s Tomas Haake performing the taiko drums with the band on the making of Alphaville video, the part still comes as a surprise. The drums provide the perfect blend of intensity and authenticity, almost sounding primal. It meshes with the song perfectly. After the taiko drums, the song erupts into a whirlwind of heavy guitars with piano in the background, but you still hear that almost primal drumming style, giving the song an even more interesting vibe.

“Atomic Age” is by far the coolest song on the album and starts with a barbershop quartet. While the singing is phenomenal, it sounds distorted, weird, and gives off a creepy vibe for the chaos that’s about to unfold. If you like music (or any art, really) that makes you uncomfortable, this song will definitely be one of your favorites on the album. The song starts with a creepy guitar intro and moves into a labyrinth of cryptic sounds and Ezrin’s deep growls. This is contrasted with some softer and drum heavy parts with evil spoken parts. The song continues to explode in an enigma of styles, such as Arabic singing morphing into Ezrin’s growls with layers of screaming, electronic distorted parts, and a marching drum ending.

The title track “Alphaville” is another enigma, with a perfect jazz and black metal fusion. The song follows this trend until the middle, when it morphs into a cacophony of trombones and distorted effects. Around this time is when the guitars and bass pick up in speed, galloping its way into a vortex of insanity.

Imperial Triumphant covers Voivod’s “Experiment” and The Residents’ “Happy Home.” It’s not surprising that they covered Voivod, who also have that spastic sound, though they’re more thrashy and not as dark as Imperial Triumphant. Still, Imperial Triumphant gives a new light to such a legendary band. Phlegeton’s deep growls lend this classic song a darker turn, while Colin Marston’s guitar playing is perfectly suited for this cover. The song still sounds as crazy as Voivod but with that Imperial Triumphant edge of depravity.

The Residents cover, however, really tops the cake. The Residents are weird as it is, and you can’t help but love their creepy and oddball appeal. Comparing the cover to the original song, Imperial Triumphant keeps the weirdness in “Happy Home,” with the crazy synths, varying vocal melodies, and sound effects, while they all use their heavier sounding instruments and screaming layers to make The Residents sound more brutal.

Imperial Triumphant has released one of the strongest albums of 2020, and Alphaville will flourish in this crazy and unpredictable world we’re living in. Listeners will find an eerie comfort in Ezrin’s graveling vocals and guitar playing, Kenny Grohowski’s mechanical drumming, and Steve Blanco’s crushing bass. The fact that they seamlessly weave in a barbershop quartet, piano, trombones, operatic singing, taiko drums, and grocery store intercom sounds into their extreme sound is impressive. Imperial Triumphant has a chokehold on extreme music fans and they’re not letting go anytime soon. ~ Stephanie Jensen