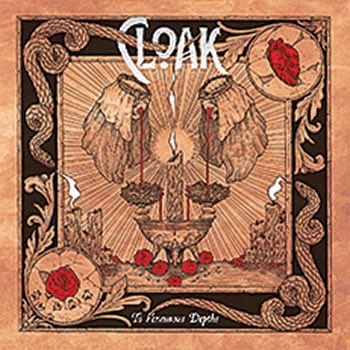 DARK METAL: While not the first band to blow up the boundaries between black metal and melodic death metal, Swedish act Tribulation did it with such style on 2015’s Children of the Night that they made the arbitrary genre divides seem like they had never existed in the first place. Their American brethren in Cloak follow the left-hand path forged by their Scandinavian counterparts, but they also find their own way through the darkness. It feels like the band was nurtured on Dark Tranquillity, Satyricon, and Iron Maiden, and nobody told them that they couldn’t make something that sounded like all three. To Venomous Depths, their first full-length, leans a little more into the black metal while adding a progressive bent. It’s an approach to black ‘n’ roll that comes across simultaneously evil and fun. Songs like “To Venomous Depths / Where the Light Shines” and “Beyond the Veil” deliver some serious shred, while more moody pieces like “Within the Timeless Black” and “Forever Burned” provide some (but not much) respite. If there’s any real weakness here, it’s in the variety. Most of the songs are midtempo, making for a slightly monotonous listen. Still, each song on its own is a blast, and with a debut this assured, it seems likely that they’ll get that sorted out. These are depths worth visiting. ~ Jeff Treppel