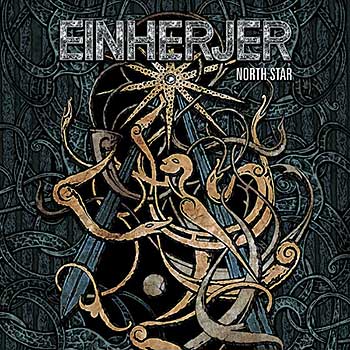 BLOOD, SWEAT, AND HEATHENS: Full disclosure: I’m long since removed from paying attention to Einherjer albums, the last one probably being Blot in 2003. Perhaps it was the bitter taste leftover from the band’s inferior follow-up to their early hit Dragons of the North, Odin Owns Ye All, or maybe Einherjer just wasn’t up to competing with some of their Viking/heathen metal contemporaries.

Well, if North Star, the band’s latest effort, is any indication of their recent string of quality, perhaps it’s time I do some reinvestigation. This eighth LP is a killer example of how to mix up one’s heathen metal roots with some contemporary arrangements that sound legitimately fresh and exciting. Einherjer stood out on Dragons of the North with their almost pop sensibility of hanging every song on a powerful melody. The band was heavy, sure, but there was an emotional resonance that set them apart from say, an Enslaved during their black/Viking metal period.

North Star still has that bass heavy production, as well, allowing the low end to cut through nearly everything. It’s a stylistic choice that may not be for everybody, but it works big time on a song like “West Coast Groove,” where Einherjer almost comes across like a heathen version of Iron Maiden or 80s Kiss. This sense of heavy metal tradition seems to permeate the rest of the album, and it’s clear that we’re still dealing with Scandinavian heathen metal here, but it’s also a little more than that, as well.

“Higher Fire” and “Echoes in Blood” bring things back to a more traditionally minded Viking metal headspace. It never sounds stale, but rather injects an excellent energy into a genre that can often become mired down in its stylistic tropes. So, if you’re out for something just a little different from yet another Amon Amarth album, come back to Einherjer and see what you’ve been missing. ~ George Pacheco