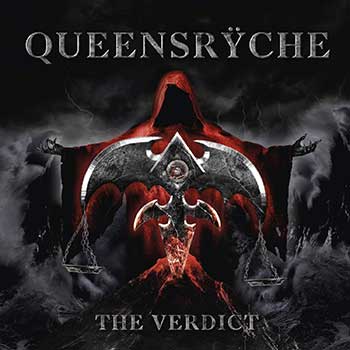 PROG YES, PRETENTIOUS NO: They’re a four piece now, but the decades spanning Seattle band Queensrÿche still sounds like an orchestra on 16th albumThe Verdict. And with the stepping in of lead vocalist Todd La Torre into the drummer position as well for this release (his third, taking over from Geoff Tate), they sound just as tight as they do epochal. This is a new recurrent era of energetic change for a band remembered for a strange trajectory, from creative hard visions to rock opera level expressions and concept albums. The Verdict scales their music all the way back to a time when they sounded as dynamically fresh as they seemed frenetically driven, inspired by Iron Maiden and Judas Priest.

But it’s not just a return to the roots romp. They’ve never lost their prog edge, instead integrating it more intricately into politically charged anthems like ”Propaganda Fashion” (as boldly anti-authoritarian as anything they’ve ever recorded), and the acoustically augmented “Dark Reverie” (far too unique to be tagged a simple power ballad). Nothing here wastes time or patience. Founder/guitarist Michael Wilton, bassist Eddie Jackson, and guitarist Parker Lundgren keep everything churning and clamoring with precision and purpose.

Yes, there are a few dragon slaying metal sounding moments on The Verdict(something Jack Black would want played on repeat at his funeral), but as there are few shades of gray in their anarchistic worldview, it is also surprising how subtle and nuanced the rhythms and effects of tracks like “Inside Out” and ”Bent” display. All 10 songs confront hypocrisy and oppression in the starkest and most apocalyptic of terms, and though tempos actually get near thrash, nothing turns into a tantrum or threnody. Extremely solid work, with strongly elegant textures throughout, ultimately surprising anyone who hasn’t been paying attention since “Silent Lucidity.” ~ Lou Flesh