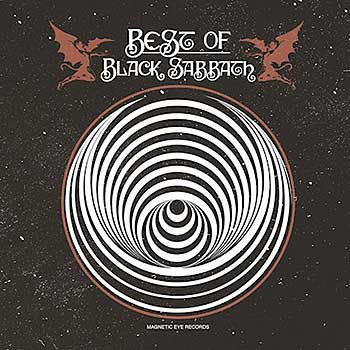 ACTING LIKE BLACK SABBATH: I’m going to go out on a pretty sturdy limb and assume that, if you’re skulking around the various arms of the Outburn empire, you’re at the very least moderately familiar with Black Sabbath. This gets said almost entirely in jest as they are the band responsible for this whole heavy metal malarkey. At the same time, yours truly has had, and still has, far too many regular (and shocking, to be honest) encounters with folks that don’t know Metallica released four albums before the Black Album and the heavy metal ostriches out there that only know Venom from Prime Evil onward. Kids today, I tells ya…

Anyhow, Best of Black Sabbath [Redux] is a companion piece celebrating the 50th anniversary of the Birmingham bashers with the companions being a various artists rendition of the classic Vol. 4 album and Zakk Wylde’s Zakk Sabbath fully covering the debut record that started it all. Featured within this particular collection are 15 bands cranking out 15 renditions of Sabbath songs, some unrecognizable at first glance, others lockstep faithful to the original. Given the occasion at hand and the status of the artist in the salutation spotlight, the participants naturally put their best foot forward with their respective recordings, and the result is an album with very few weak spots.

Tradition is generally upheld by the likes of Summoner, Caustic Casanova, Howling Giant, and Ginsberg/Margera/Reeder/Rota as they stick to the blueprint and offer dependable, full-force renditions of household tunes like “A National Acrobat” and “N.I.B.” There are a couple of bands that embark upon varying degrees of tinkering. Leather Lung adds their own snotty aggression to “Hole in the Sky,” Year of the Cobra smoothes the already dreamy “Planet Caravan” with a gossamer touch, and Earthless injects a bit of Thin Lizzy shimmy into “Never Say Die.”

Then there are the more transformative versions. Mooner rocks out with fuzz, flutes and lounge-y ambiance on “The Wizard,” Solace gives the majority of “Electric Funeral” a beatnik ‘n’ bongo treatment, Elephant Tree’s version of “Paranoid” is super sludgy, bluesy, and barely recognizable beyond the vocal melody and lyrics, and Brume runs the already chilled “Solitude” through chamber music instrumentation and colossal doom. But perhaps the best news about this collection is Rwake’s cover of “The Writ” (stylized as “The Rwrit),” which is not only a dynamically astute and full-bodied version, but a signal that the dirty kids from Arkansas have broken their half-decade of silence and will hopefully grace the world with some new material in the near future. ~ Kevin Stewart-Panko

THE ACCUSED A.D.: The Ghoul in the Mirror﻿