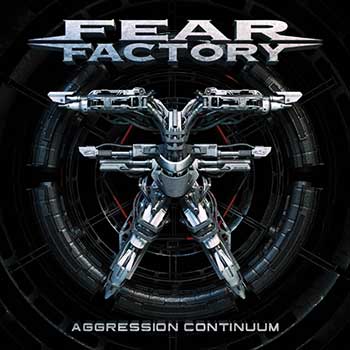 INDUSTRIAL METAL: Almost always, Los Angeles’ Fear Factory can do no wrong. Bursting onto the scene with its 1992 debut beast of an album, Soul of a New Machine—not to mention its 1995 game-changing Demanufacture album—the band has continuously released quality albums one after another. However, dissension in the ranks led to guitarist Dino Cazares to exit the band in 2002 (returning in 2009). Various lineup changes, band hiatuses, and legal troubles followed, including the recent lawsuit over the band name. Fear Factory’s 11th full-length album, Aggression Continuum, has been a long time coming, as it was actually finished in 2017. However, legalities and inner-band bickering slowed the funding and release of the album. Upon release, it was already a well known fact that iconic singer Burton C. Bell had left the band. Fortunately, the wind has not been blown out of the band’s sails.

On its 10 blistering tracks, the band’s familiar trademark sound is well intact. Musically, Bell is right on the money with his vocals, sounding more pissed off and aggressive than usual, while Cazares is still a master at those monster riffs (as well as handling the bass). Plus, the drumming of Mike Heller is outstanding. The contrast between aggression and melody works really well on this record, as some of the melodic components are reminiscent of 2015’s Genexus, while the intense aggressiveness is similar to 2010’s Mechanize (opening track “Recode”). Plus, there are a few brief brilliant moments that will remind you of Demanufacture as well (“Purity”). There are also a few atypical twists and turns in the Fear Factory sound by introducing a more commercial tone with prominent poppy synth melodies on parts of “Cognitive Dissonance,” “Monolith,” and “Fuel Injected Suicide Machine.” However, every track works well as the sum of all the album’s parts. Produced and engineered by Damien Rainaud (DragonForce, Once Human), with keyboards by Igor Khoroshev (ex-Yes), and programming on two songs from longtime collaborator Rhys Fulber (Front Line Assembly), the overall sound is massive. In addition, Aggression Continuum was mixed by legendary Andy Sneap (Judas Priest, Megadeth, Killswitch Engage), who also mixed Genexus.

Fear Factory has endured several major hiccups since its formation, but has still managed to forge ahead. Album closer, “End of Line,” could be a bit prophetic of Fear Factory as a band, as the search for a new singer is ongoing. However, if Aggression Continuum is truly the final farewell of Bell, then what a way to go. ~ Kelley Simms