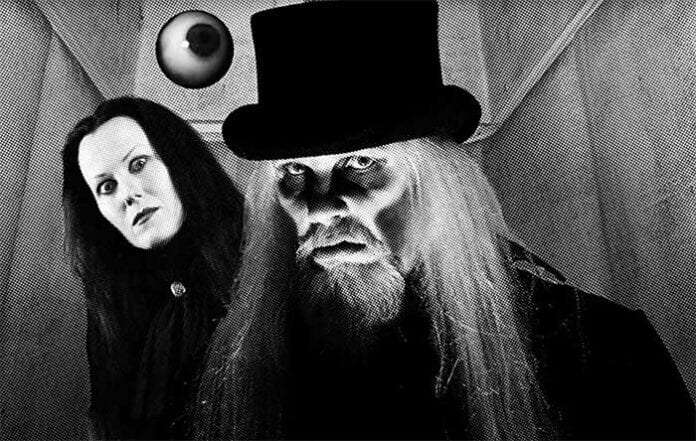 Just in time for the most macabre season of the year, horror-occult-goth metal/rock fusers BLOODY HAMMERS have announced a new horror punk-inspired full-length album! The 11-track offering, entitled Songs Of Unspeakable Terror, will be unleashed on January 15, 2021 via Napalm Records and marks a new, eccentric chapter in the Transylvania County, North Carolina-based husband and wife duo’s musical story.

While it doesn’t stray too dangerously far from the sound listeners have grown to infectiously adore, the band’s latest full-length explores yet uncharted territory: retro-ized horror punk in all its gritty glory. This beastly record shouldn’t be confused as an all new direction for the band, though – these songs are a pandemic lockdown labor of love, a temporary foray into the unknown, while still remaining true to the BLOODY HAMMERS sonic trademark.

Get a first listen for yourself, but beware – you’ve never heard BLOODY HAMMERS like this! Today, the band has unveiled an inventive new music video for their first single, ”A Night To Dismember” – a dark, swinging, hefty punk two-stepper with an earworm chorus that’ll have fans chanting along in no time.

Frontman/multi-instrumentalist Anders Manga says about the track:
“I’ve had the title, ‘A Night to Dismember’ written down on my to-do list for a long time. The title is based on the 1980’s direct-to-VHS Horror effort by NYC Exploitation movie legend Doris Wishman. When I heard Samantha Fox, who starred in that same movie, had died in April (2020) from a COVID-19 related illness, I just started writing and it’s a bit of a blur from there. It came together quickly. Our take on the title is different but still stands as a tribute to those two legendary ladies of celluloid sleaze.”

Bassist Devallia adds about video:
“Considering the title of the song, we thought of many different ways to go about making this video. In the end we decided to go more toward the absurd. As Spinal Tap said, there is a fine line between stupid and clever, and we are standing firmly on that line.”

UNDEROATH Releasing Audio + Video from Lost in the Sound of...