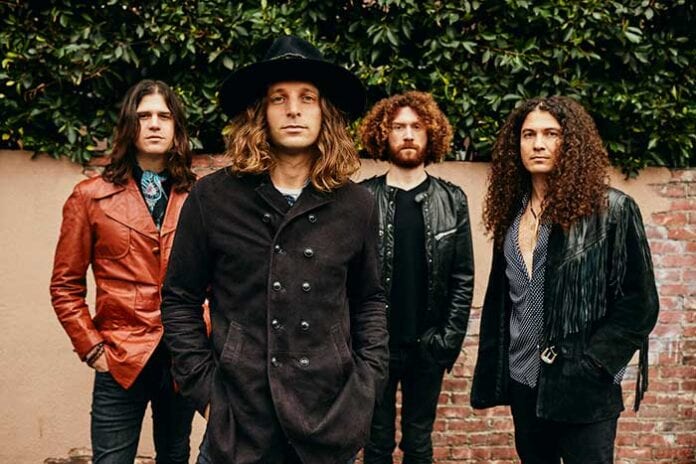 For many bands, it takes a while to build an audience and connect with fans. However, Dirty Honey’s success came right out of the gate with its five-track, self-released eponymous EP in March 2019. Teaming up with producer Nick DiDia (Rage Against the Machine, Pearl Jam), the band flew to Australia to record the EP. Its first single, “When I’m Gone,” exploded on the charts and became the first song by an unsigned artist to reach No. 1 on Billboard’s Mainstream Rock chart.

“I think we were surprised, but also we went into this real serious about it,” Notto explains about the band’s quick rise during a recent Zoom chat. “Long before that song went No. 1, we were already pushing really hard. We had toured the first eight months of 2019 before that song went No. 1. By the time it went No. 1, we were really getting our whole engine running smoothly between us and management, booking agents, and all of our dream team, as we like to call them. It was a nice tap on the butt of encouragement to keep doing what we were doing.”

“THAT WAS THE GAME PLAN, JUST GO AS HARD AS WE CAN”

Dirty Honey formed when Labelle relocated to Los Angeles from upstate New York and soon met Notto through mutual musician friends. Notto then brought Smolian into the band, then Smolian brought Coverstone in. The first time the four members played together was a live gig on the sidewalk of Sunset Boulevard in front of about 100 people. After that inaugural gig, Coverstone leapt from his drum kit and declared his allegiance to the band. It was after this performance that the foursome decided to officially form the band, even before they had the Dirty Honey name.

“Me and Justin said to each other that if this fails, it’s because the engine blew with the foot through the floor,” Notto says. “That was the game plan, just go as hard as we can. It was like this was the last thing we were ever going to do.”

Due to the pandemic of 2020, the band had more time with the writing and recording process on its new self-titled full-length album compared to its previous EP. Plus, having toured for a while prior to writing, the band captured that live sound that they were honing on the road playing live gigs.

“We were trying to take off where we left it and expand upon the sound and make it better,” Smolian says of the new album. “That year of touring that we got to do helped us focus on what we are as a band, because it all happened so fast. Luckily, we’ve had time to reflect on it. There wasn’t much writing done in the studio. We were so prepared this time. It was just about getting takes and not about changing the arrangement or anything like that. We had done all of that before we hit the studio this time around.”

“EVERYTHING IS STEPPED UP ON THIS RECORDING. WE’RE VERY PROUD OF THE SONGWRITING.”

“We got to do a lot more preproduction together because we were all just stuck here,” Notto says. “Everything is stepped up on this recording. We’re very proud of the songwriting. We’re proud of the cohesiveness and we’re proud of how the album plays from start to finish. And that’s all the result of the extra time we had. Plus, to do it in a class A studio was a nice experience. It was the inverse of the first EP in terms of time and preparation, both before the studio and during the studio. On the EP, we had 12 days to record six songs. Fast-forward to this album, we had an extra four months of nothing to do but write, rewrite, demo, record at home, and figure it out. Then we got to the studio with 12 songs and got it done in six days. We just went in and got shit done”

Dirty Honey’s first headlining tour in January and February 2020, with The Amazons as support, sold out every date. Dirty Honey is becoming a seasoned live band, as they’ve gone on to open for a slew of acts such as Red Sun Rising, The Who, Skillet, Alter Bridge, Guns N’ Roses, and Slash. They’ve also appeared at major rock festivals over the years, such as Welcome to Rockville, Rocklahoma, Louder Than Life, Heavy MTL, and Epicenter. Getting to see these veteran acts’ day-to-day operation and the business side of things, Dirty Honey is learning the ropes from some of the biggest bands on the scene.

“YOU HAVE TO GET UP THERE AND KILL IT EVERY NIGHT”

“Anything that any of us did individually as musicians prior to this entire run has really felt like child’s play,” Notto admits. “Being around anyone from Alter Bridge, The Who, Slash…just seeing how business is run as they scale up. The biggest inspiration was seeing guys like Slash and Mark Tremonti, how passionate they still are for guitar. We learned everything at every corner. From Slash, you see how someone who’s very famous, how their organization has to operate so that he has his own space. From Alter Bridge, where Tremonti is not as famous singularly, but still successful, and how he’s able to operate differently and how things run like clockwork. You have to get up there and kill it every night. We’re confident as a band in that sense that we’ll all kill it, but just seeing it, that’s the baseline. With The Who, that was just a one-off, but we were more in awe the whole night and just took what we could from it.”

“Right off the bat, that’s the first main bullet point—expanding our reach, expanding our audience, and getting our name out there,” Notto says of opening for The Black Crowes. “But on a second tier behind the curtain look, I’m hoping to get some mojo rubbed off from Chris and Rich Robinson. That would be really cool because those guys are closer to our lane musically, with the exception of Guns N’ Roses, than anyone else we’ve opened for. They’re real soulful in their approach to music, so it’s going to have a nice effect on us and I hope we get to be around them, get to know them a little bit, and steal some secrets!” (laughs)

At this point in Dirty Honey’s career, the sky’s the limit. By paying its dues and getting some top-notch opening slots, the band’s quick rise to success is paying off at the moment.

“I want to be the biggest rock ‘n’ roll band in the world,” Smolian declares. “I want to do what we’re doing with The Black Crowes, but as headliners. There are dues and we’re not afraid to pay them. But if we can avoid the dues, we’re all about that, too!”

DREAM THEATER: In Their Realm