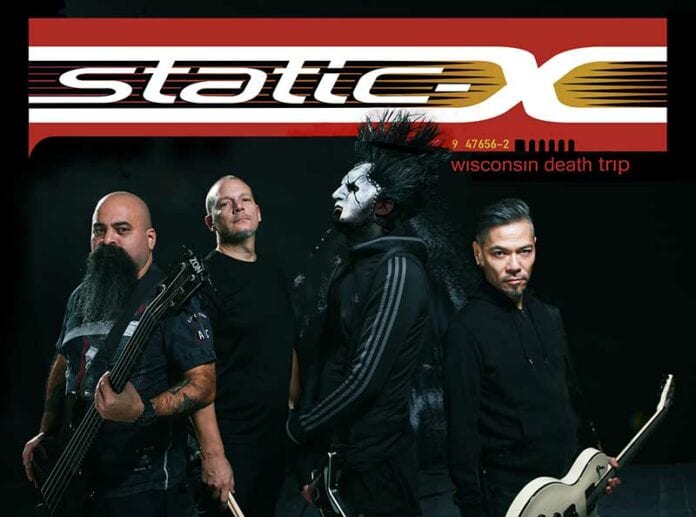 Wayne Static was a legend. Is a legend. His untimely passing left a hole in the hearts of many, from his family, to his friends, to all of the fans that were touched by his music. Away from the public, an idea was brewing from those closest to Wayne to somehow, in some way, bring a piece of him back to the world. Fast forward to now, and we are on the cusp of an anniversary tour featuring the members of Static-X and a masked singer who will bring the music back to life for the world to celebrate again. We had the pleasure of speaking with bassist Tony Campos, one of Wayne’s closest friends and one of his longest band members, about this forthcoming tour.

At what point did Static-X become a possibility again? When was this reunion first conceptualized?
I’d say towards the end of 2016. I started reaching out to everyone again.

How do you feel now that the memorial tour is on the verge of fruition?
Excited, nervous! (laughs) I am definitely excited and looking forward to it.

“I KEEP RUNNING INTO PEOPLE THAT MISS THE BAND, MISS WAYNE, AND MISS HEARING THOSE SONGS. IT IS COOL THAT WE CAN DO IT AGAIN.”

Is there anything specific that you are particularly eager for?
Just getting back out there and playing these songs again for people. It’s been a long time, and throughout my travels I keep running into people that miss the band, miss Wayne, and miss hearing those songs. It is cool that we can do it again.

What was the selection process for finding the right frontman for this memorial tour?
We wanted someone that we knew, that knew Wayne, and obviously that could do the performance in the spirit of what Wayne’s vibe and energy was. He had to be a cool dude, too! We didn’t have to look too hard—that was the cool thing. It just fell into place that way.

Did the singer of choice have to practice a bunch to really embody the voice and mannerisms of Wayne, or did it come naturally?
When I first heard him do it, I knew that this was going to work. He’s a perfectionist, so he’s been rehearsing on his own for the last month. He’s been playing the songs and singing, so by the time the full band starts rehearsing in a couple of weeks, he will be ready and we will be ready.

How do you feel fans are going to respond to this singer?
Just from the response that I have seen online, as far as the video stuff that we have put out there with the audio of him actually singing some of that stuff, I think it is going to go over very well.

Fans have been buzzing about this memorial tour for months.  What has the feedback been like?
It’s been great! The majority of the fans have been really excited. Like I said, they miss hearing these songs and are very excited that they can hear this and see this again. They can really experience that one more time.

How did the concept of the mask come about?
It was actually a thing that our touring vocalist came up with. He didn’t want his history in his career to be the focal point of what we were doing. We didn’t want it to be “this is Static-X with a new singer.” We didn’t want a Van Hagar situation. It made a lot of sense to cover him up and keep his identity on the down-low and just focus on the band and the anniversary of the first record and remembering Wayne. That’s what the focus needs to be about. So, the mask just made perfect sense to help accomplish that.

Who made the mask, and how was it designed?
A friend of ours, Laney, she makes masks for Slipknot and John 5. She’s legit. We gave her the concept and she ran with it!

What has the reaction to the mask been thus far?
When people first saw it…it’s funny how it went down. When we put out a couple of teaser videos and stuff explaining what we were doing and maybe six months later we put out another teaser about how we were going to present this live and the mask, initially, the first people that saw it, from what I could tell, didn’t even know what we were doing! So, that was the first thing they saw and said, “What the hell is this?!” They had no clue of the concept or the motivations behind any of it, so they were a little shocked to see that. But once more of the fans knew what we were doing, they got it and they understand what we are doing. So, for the most part, the reaction has been very positive.

Do you see that mask always being a staple?
I don’t think so. I don’t know how long we are going to do this, honestly. Right now, we are just celebrating the anniversary. If it is something fans want, then maybe we will bring it back. This is all for them.

The fans decide what happens after the tour closes?
Yes!

Static-X had quite a few musicians coming in and out of the lineup, but you stuck by Wayne the longest. What made you stay?
For one, I love the music. Wayne was my friend for a long time. It was home for me. Wayne and the guys were like my family. Yes, I went and did other things, but I always came home.

“AS MUCH FUN AS THE TOURING WAS, SOME OF MY FONDEST MEMORIES ARE WHEN WE WEREN’T ON TOUR.”

Tell us about your best memories with Wayne.
As much fun as the touring was, some of my fondest memories are when we weren’t on tour. We were actually both avid 4×4 off-road enthusiasts. We had trucks that we had built up to go rock crawling out in the desert. When we weren’t on tour, at least once a month we would go out into the desert for the weekend. Those moments for me were the coolest, especially at the end of the day when we were sitting around a campfire and just drinking and looking up at the stars, looking back at everything we’ve done up to that point. Those were good times for sure.

Wayne had accomplished so much in his life. What are your greatest accomplishments that you shared with Wayne?
Getting to do Ozzfest. That was huge! Selling a million records! When the album went gold, Warner Bros. actually threw a big celebration at the label in Burbank, and they picked us up in a limo and had this fanfare thing, and it was bizarre! It was surreal! There were some really cool moments that we all shared, lots of cool things like that.

What do you feel is the best way for fans to honor the legacy of Wayne Static?
Just remember the good times, the good music, and raise a glass for Wayne!

If you could speak to Wayne one more time, what would you want to say to him?
That’s a long answer. We went through so much. Where do you even start? I do wish he was here. It’s one of the reasons I feel so strong about doing this without him. Had he overcome his demons, beat his addictions, distanced himself from the people who were negatively influencing him and enabling his addictions, had he done that, I truly believe in my heart that he would be with us here, right now doing this. You’d be talking to him instead of me! We would have a lot to discuss for sure.