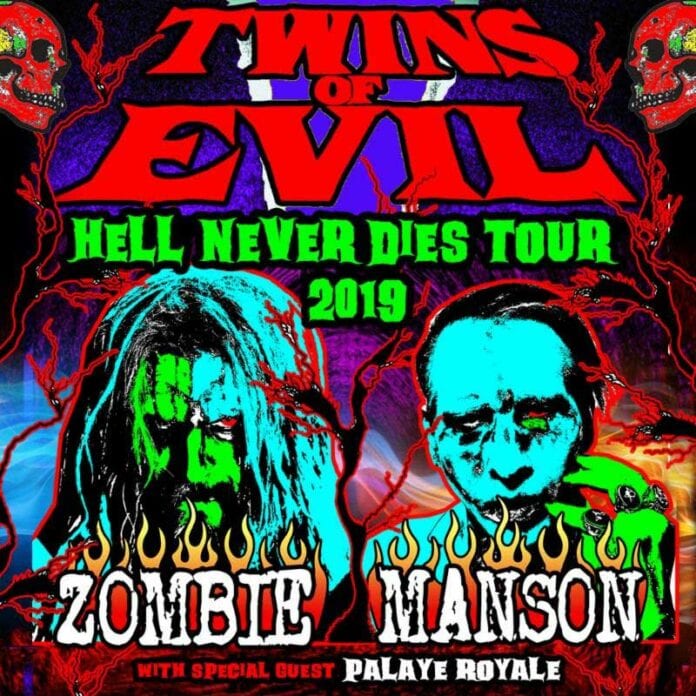 Hot off the heels of their national headline “The Funeral” tour that ended with a triumphant sell-out show at The Fonda in LA, notorious indy-art rockers, Palaye Royale have today announced that they will be joining Rob Zombie and Marilyn Manson on their Twins of Evil “Hell Never Dies” US tour this summer. Tickets are available now from Palayeroyale.com

The Funeral Tour saw the end of the band’s “Boom Boom Room” era, named after the band’s double album, Boom Boom Room Side A and Side B. Boom Boom Room Side B was released in September 2018 via Sumerian records and saw an impressive first week on the Billboard charts, debuting at #17 on the Top Albums Chart, #3 Top Alternative and #6 Top Rock. The lead single from the album, “You’ll Be Fine” hit #23 at rock radio and to date has had 6.5 million streams on Spotify.

The band have clocked up over 40 million total streams on Spotify, over 43 million views on YouTube and have a combined social media following of 1 million and their rapid upwards trajectory shows no signs of slowing down thanks to their infamous and rabidly devoted, Soldiers of The Royal Council.

Palaye Royale will spend the next two weeks in Europe hitting the major festival circuit with performances at legendary festivals such as Download, Isle of Wight and Reading & Leeds in the UK, Austria’s Nova Rock and Pinkpop in the Netherlands. The band will also be playing a special, intimate charity show in London, UK in aid of Nordoff Robbins, the largest independent music therapy charity in the UK, dedicated to changing the lives of vulnerable and isolated people. The show will take place at the infamous Borderline on June 17th.

Full dates for the Twins Of Evil “Hell Never Dies Tour” 2019 are below: