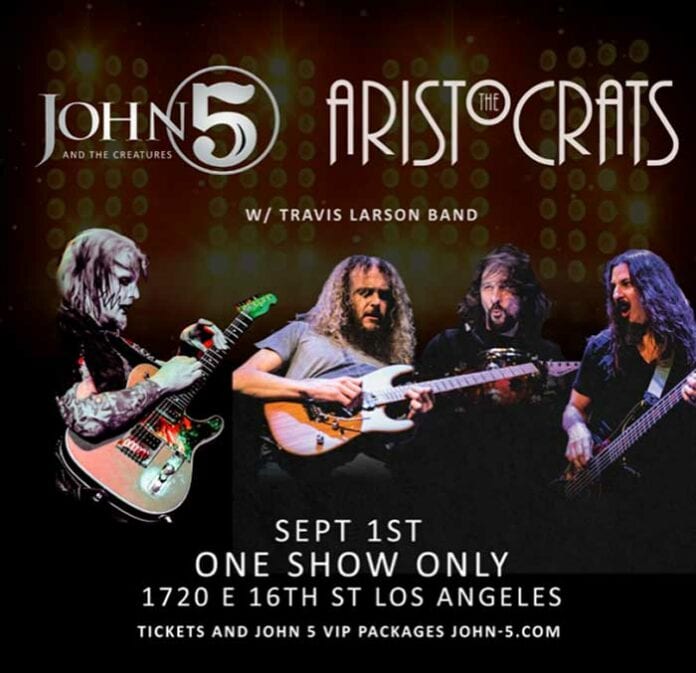 JOHN 5 and the Creatures—comprised of world-renowned guitarist JOHN 5, bassist Ian Ross and drummer Logan Miles Nix—and The Aristocrats (guitarist Guthrie Govan, bassist Bryan Beller and drummer Marco Minnemann) will team up to co-headline an amazing night of instrumental euphoria on Sunday, September 1 at 1720 in Los Angeles. The show will be the first JOHN 5 performance following the July 31 release of the anxiously awaited new album, Invasion.

“JOHN 5 and The Aristocrats—It doesn’t get much better than that,” John 5 says. “It’s one show only and you’re not going to want to miss it. It’s going to be a very exciting night, and definitely one to remember.”

Tickets are available now via www.etix.com/ticket/p/5271486/john-5the-aristocrats–los-angeles-1720. Special VIP Packages will also be available for JOHN 5 through the JOHN 5 webstore at www.john-5.com/store.

Says The Aristocrats, “We always say that anything can happen onstage at an Aristocrats show, and that goes double for a JOHN 5/Aristocrats double bill! We’re psyched because The Aristocrats and JOHN 5 are obviously coming at the instrumental rock thing from just completely different angles, and neither one of us is playing it straight down the middle. Should be a fun night for anyone in L.A. who likes their music loud and bent.”