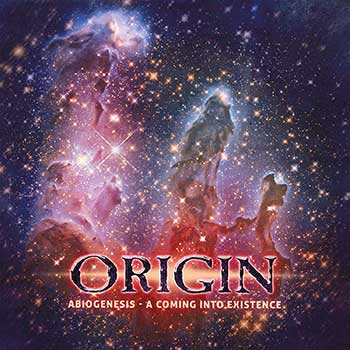 ORIGIN
Abiogenesis – A Coming into Existence

THE ORIGINS OF ORIGIN: A curious note about this latest Origin release is that, technically speaking, more than half of it isn’t Origin. See if you can follow the bouncing ball: If you’re a fan of death metal to any extent, chances are you know Origin. Originally hailing from Kansas, the band was formed by guitarist Paul Ryan, who remains the lone original member. The debut release by the band was A Coming into Existence, a four song EP recorded and released in 1998. The quartet of tracks have been remixed and re-mastered here, but the main program is Ryan’s re-recording of material from his pre-Origin bands Necrotomy and Thee Abomination.

Now, obviously everyone is influenced and inspired by something that came before them. The strange thing about this release is how two-thirds of it is exclusively Ryan (and not the other 3/4ths of Origin) playing and recording all instruments of material from bands that preceded the band whose name is slapped on the cover. Good on Ryan for tipping his hat to his formative years and demonstrating his ability on other instruments beyond guitar, including vocals, but the logic in releasing it under the Origin banner is suspect, if not faulty. The accompanying bio describes is as “the origins of Origin,” which makes much more sense.

Whatever the case, the material from the pre-Origin days is actually quite good. Rooted in the nascent days of death metal, before some semblance of groove and hooks got obliterated by impenetrable technical flash and prodigious skill as songwriting technique, the Nectotomy and Thee Abomination stuff rams in a whole lot of grind and elements of spazzy thrash/hardcore along the lines of Cephalic Carnage and Napalm Death. There’s a definite naiveté you can hear in how much more those bands were biting off than they could chew and how Ryan’s early bands wanted to tackle everything in their wake. Songs like “Insanity” and “Infestation” (Necrotomy) and “Mauled” (Thee Abomination) are quite enjoyable, especially in how Ryan transposes and interprets the raw attack of the early material through the lens of 20-plus years in one of the most technically adventurous and proficient death metal bands America has to offer. And it doesn’t take an eagle eared listener to hear how Origin itself has expanded upon the circuitous tech blender of its original debut. The elements are there, but the ingredients that separate Origin from the pack were but wispily introduced and limited by the exuberance of a young band trying to put it all out on display. As A Coming into Existence was never released with proper distribution, this release is one fans will enjoy, whether to musically connect the dots or to have access to unavailable/hard to find early material. Either way, this is destined to exclusively be the priapismic focus of Origin completists. ~ Kevin Stewart-Panko