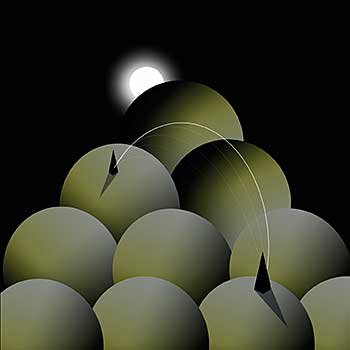 REMIX AND REWIND: The term “pan and scan” means different things to different people. For some, it’s a somewhat nostalgic look back on the days of VHS, and how the widescreen images of our favorite films were chopped and cropped to fit a home video aspect ratio. For Pan/Scan, it’s more of a metaphor for the musical ideas of one Christian Rzechak, who’s other project, Sospetto, has released four albums on Cineploit Records dedicated to the diverse cinematic styling of 1970s and 80s Italy.

Kosmonauter is something a bit different from Rzechak, but no less cinematic. Instead, the nostalgia here is for icy layers of synth that sound like glaciers forming out in space. It’s where artists like Tangerine Dream still rule the world with their grandiose and otherworldly symphonies. A place that’s plugged in and tethered to its instrument, yet also capable of floating off into the ether and letting the rhythmic, sequenced throb fill their brain with electronic, seratonic joy.

Fancy words aside, Kosmonauter is a must if you’re even remotely into the sounds of Steve Moore, Zombi, or Klaus Schulz. This six track effort isn’t exactly in the minimalist Krautrock vein of Tangerine Dream’s earliest work, but neither is it taking from that band’s latter period of shorter, more punctual songs. Instead, Rzechak seems to be taking that oft-imitated Tangerine Dream framework and trying to make it fit that “soundtrack for an imaginary film” template that’s also quite popular. The only thing is, Pan/Scan definitely does it better than most.

That’s because the songs on here, especially “Orientation” and “Levitation,” almost sound like excerpts from 2001 or Blade Runner. There’s an immediacy to the composition that’s both memorable and experimental, an approach that’s simple but effective. Kosmonauter starts slow and builds from the ground up with soft pulses and otherworldly melodies that are relaxing but also possess the potential for this somber feeling of dread.

Elsewhere, “Confrontation” ups the ante a bit, becoming more aggressive with its synthesized percussion, while “Acceleration” and “Finalisation” (sic) almost approach synthwave but stop short of stepping with both feet into that world. No, Kosmonauter isn’t so much an idealized version of the 1970s or 80s that didn’t exist, but rather something that potentially could’ve lived in that world. It’s also yet another outstanding release from the Cineploit label, where artists who are inspired by the past seem to be doing a great job at defining the future of electronic and cinematic music. ~ George Pacheco