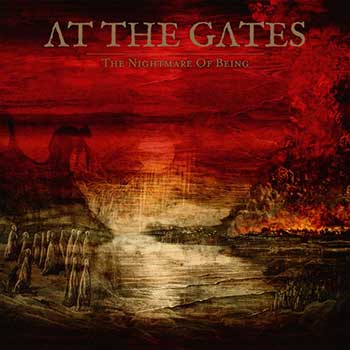 AT THE GATES
The Nightmare of Being

DARK AND POWERFUL: At the Gates has released one of the most powerful albums of the year. The Nightmare of Being is by far one of their darkest albums, showcasing a new side of At the Gates, with orchestrations and riveting effects that add a unique twist to the band’s iconic sound.

An album with amazing songwriting and full of versatility, “Spectre of Extinction”starts things offat a fast-pace, making it not only the perfect single but also an amazing introduction. With mind-blowing guitar work and rapid drumming, this song will be a banger live. “The Paradox”is an ode to the signature sound of At the Gates, with catchy melodies and enough variations to keep the song interesting. The title track slows things down, gradually increasing in tempo, as sublime riffs make up the core of the song, mesmerizing the listener. “Touched by the White Hands of Death” blends all these elements perfectly. A beautiful flute melody opens the song alongside a heavy drum pattern. It’s a dark song with a somber tone. “The Fall Into Time”is a pitch-black epic with pounding drums and an entire orchestra opening up the track. All of the orchestrations are shadowy, blending in with the band’s sound and the album’s pessimistic concept. The shifts in instruments and chord progressions set this song ablaze, as do the complex basslines. The album closes with “Eternal Winter of Reason,” a song very raw in its darkness and aggression, with guitars flowing throughout and the perfect balance of heaviness and melody.

As one of the strongest releases in the band’s discography, The Nightmare of Being proves why At the Gates is extremely influential. The band’s ability to maintain its core sound and also experiment without veering too far off the path is especially noteworthy. ~ Stephanie Jensen