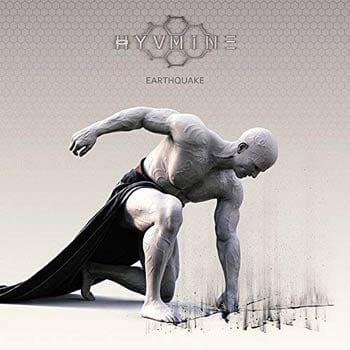 SHREDDER ADDS VOCALS: Sometimes you have to wonder about the metal world’s lack of imagination. This isn’t a condemnation of Hyvmine and its vocalist/lead guitarist, Al Joseph, but the press corps. Likening Joseph to “the next Tosin Abisi” in the bio is about as simplistic a cop out as the reviews comparing him to Vernon Reid. Sure, he’s a black guy who shreds the proverbial fuck out of an Ibanez, but listening to his 2017 solo/instrumental album, All of Creation, it’s the Eric Johnson and John Petrucci influences that leapt out like a hot footed kangaroo. Earthquake is Joseph’s first foray into non-instrumental music during which he experiences the tricky balance of technical wizardry and blazing shred with having to write vocal lines and choruses. All shredders who eventually added vocals (Satriani, Vai, Hamm) have dealt with the growing pains of reining in the flash for a song with beginning middle end continuity and offering a place for vocals as well showy soloing. And so does Joseph on Earthquake. There are moments, especially early on and towards the album’s end where an audible struggle to keep songs cogent and flowing exists, but overall, he makes good use of his robust vocals to nicely temper a natural leaning toward melodic, progressive metal with a lot of King’s X, 90s alt-rock/metal, and even the passable use of nu metal, which is probably the biggest victory of them all. ~ Kevin Stewart-Panko