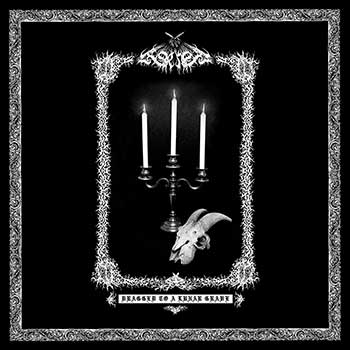 ARNA
Dragged to a Lunar Grave

BLACK METAL: The debate still rages on about the necessity of record labels in the age of liberation and equalization supposedly provided by the internet’s digitization of music and portals of availability. Assuming this isn’t your first day on the planet, you should know there are no black-and-white absolutes and there are a million ways to do any one thing. Just ask Spanish newcomers to the black metal morass, Arna. The Barcelona duo self-released Dragged to a Lunar Grave via Bandcamp back in April and quickly came to the realization that getting their name and music out to the hordes isn’t as easy as beaking off on online forums and being embraced by keyboard warriors. Let’s not even discuss the logistical nightmare of physical product production and distribution and accomplishing those tasks in the midst of a global pandemic. So, along come the Portuguese paper pushers at Signal Rex with the hopes of expanding the duo’s reach beyond isolationist and elitist circles.

It’s safe to assume Signal Rex and Arna didn’t agree to an association with the intention of fewer people listening to the band and having the label deliberately hemorrhage money. Whatever the case, they certainly picked a winner, as Arna is a band that deftly juggles the oppositional worlds of frosty black metal that punishes with a mid-range scrape with majestically melodic black metal that teeters on the cusp of Viking and/or power metal esteem.

After an intro that’s more “boring to tears” instead of “poking at fears,” “Gallows Tree” begins with some full force Norse black metal with frigid guitars ripping out expansive chords at rapid-fire pace being matched by a percussive clang and hypnotic blast beats. Second of the four tracks here, “Moonknife,” has the band demonstrating how green they are via a glaring weakness in making not so smooth tempo transitions that leave the flow and groove in tatters. However, redemption is swift, as “Dolman” rides one of Immortal’s beefier ravens all the way down under for a sparring match against a Huntsman spider raised and trained by Destroyer 666, while “Aunra” breaks open from the off with the sort of miserable melodic disposition that black metal fans wish Deafheaven would exude so that they wouldn’t have to keep denying they own Sunbather on vinyl. The wheezy organ and wind effects acting as the song’s outro may not exude the desired eerie ‘n’ evil impact, but that’s a mere blip on an otherwise sweeping landscape. Once they up their intro/interlude/outro game, Arna could be a band that forces the black metal scene to brace for impact. At least with a label behind them, a few more ears will be exposed to their exciting and energetic new blood. ~ Kevin Stewart-Panko