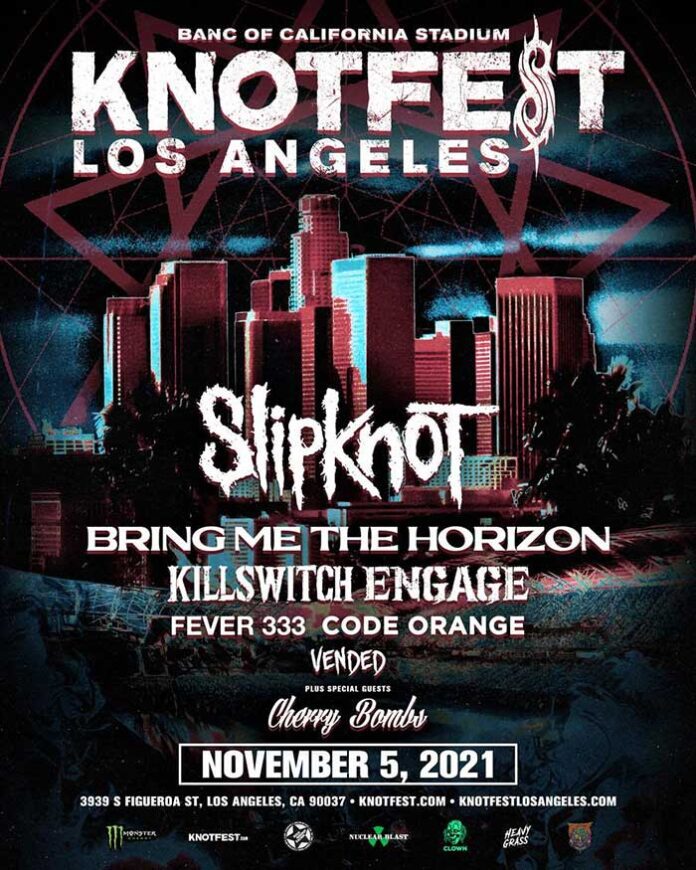 In a show of force for the band and the loud music genre overall, Knotfest, the music and counterculture experience created by the multi-platinum sonic phenomenon Slipknot, has today announced the band’s biggest Los Angeles headline performance yet, Knotfest Los Angeles, at Banc of California Stadium on Friday November 5th. Knotfest Los Angeles will see Slipknot performing at this stadium for the first time, with a stacked line-up also including Bring Me The Horizon, Killswitch Engage, Fever 333, Code Orange and Vended, with a special guest appearance from Cherry Bombs. Check out the trailer below.

Described as ‘A Mind-Altering Collision of Music, Art and Culture’, Knotfest Los Angeles ticket holders will be able to sample Slipknot’s award-winning small batch Iowa whiskies at the No.9 Whiskey Bar, including a soon-to-be-announced surprise for fans. And for the beer drinkers, there’ll be a selection of metal-friendly and band-branded beers pouring at the Knotfest Beer Pit.

Tickets for Knotfest Los Angeles will be available on pre-sale to OT9 and Knotfest.com subscribers from 9am and 10am Pacific time respectively on July 27th, with a general on-sale from 10am Pacific on July 30th, over at KnotfestLosAngeles.com.