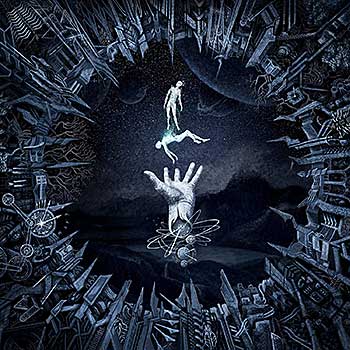 ABSENCE MAKES THE HEART GROW STRANGER: Finland’s …And Oceans has always been extremely difficult to categorize, a forward thinking black metal outfit that embraced influences from all over the map. In fact, …And Oceans strayed so far from their melodic extreme metal roots that they decided to change their name to Havoc Unit in 2005 in order to more seriously explore their interest in electro and industrial sounds.

That interest didn’t bear much creative fruit, however, as Havoc Unit called it quits three years later, with only one album and a few splits to its name. Fast-forward over a decade and …And Oceans has returned, only this time the focus seems to be heavier than ever, a case of looking back to the past in order to solidify a future. Cosmic World Mother does still embrace the band’s metaphysical lyrical concepts and spacey ambiance, but the approach is almost retro in its 90s/00s era black metal majesty.

Seriously, you could’ve slapped Cosmic World Mother on, told us it was some lost release from Moonfog, Cacophonous, or Osmose and we would’ve believed you. It’s that legit. Of course, mileage will vary depending upon your tolerance level for black metal with a heavy symphonic vibe, catchy riffs, and tons of melodic guitars. There’s a bit of nostalgia attached to this record, sure, but speaking as someone who remembers listening to …And Oceans the first time around, Cosmic World Mother might be their most satisfying material to date. ~ George Pacheco