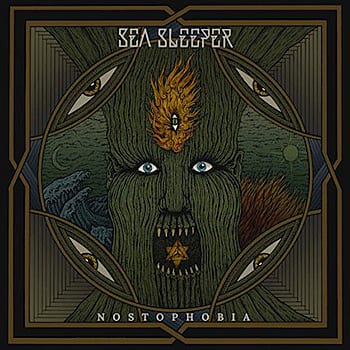 CLOGGED SINK METAL: Sea Sleeper is an odd beast. They might best be described as post-prog-groove-death metal, and beyond the obvious Gojira, Mastodon, Converge, and Meshuggah influences, there are glimpses of black metal, noise rock, and some avant-garde diversionary tactics thrown into the mix as well (think Gorguts, Imperial Triumphant, Deathspell Omega, Blut Aus Nord, and even Last Crack). Props have to be given to them for trying to lasso the different directions under the banner of the spit-shined clean production tone achieved, but the uphill battle confronting this album is in keeping the diversity from splitting off in a bunch of different directions. The monochromatic guitar sound effectively neuters the leaping and bounding around the fretboard the guitarist does and the banshee wailing to ghoulish crooning vocal gymnastics too often flirt with blandness when it comes to phrasing selection.

Your earholes will struggle to pick out the intended direction as “Salt” swings between frigid atonal riffing, sludge-lite, and wiry hammer-on/pull-off 90s metallic hardcore and the drill press pedaling and monotone clean vocals in “Old Guard.” And as much as my palate appreciates the stomp ‘n’ crawl of the title track, there are too many lurches from catchy and memorable to bland and overused picking/double kick patterns. On the other hand, most of “Coffin Salesman” illustrates the power of splitting the tonal difference while remaining a cohesive slab of metal, “George Van Tassel” is a solid punch to the throat, and the attempt at combining thick polyrhythms with Midwest alt-rock/noise and anthemic choruses in “Mountain Carver” fits in like a powder blue leisure suit at a swinger’s party.

Nostophobia is commendable for the band taking a shot at revamping their loves and likes with some amount of singularity. That it didn’t run the table its first day on the job isn’t a reason to not keep an eye on this emergent band. There is skill and intent that just needs experience and seasoning to push their course of development. And given that they not only show promise, but went whole hog with their debut, if you’re looking to spend your GameStop gains on an independent band, better these dudes instead of an unproven band trying to ignore the fact that there are dues to be paid in this business. ~ Kevin Stewart-Panko