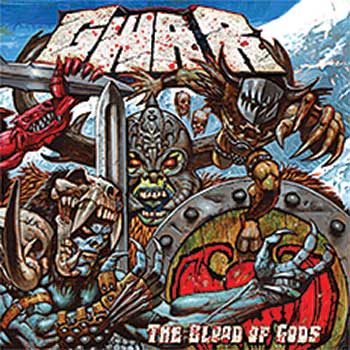 GWAR
The Blood of Gods

THRASH METAL: Nothing can kill GWAR, not even the death of original frontman Oderus Urungus (Dave Brockie) in 2014. Stylistically, Oderus’ replacement, Blothar (Michael Bishop)—who was initially the bassist Beefcake the Almighty 20 years ago—sounds much different from Oderus. However, he commands the microphone and delivers lyrics in true GWAR fashion. From the slow grinding Black Sabbath riffs of opener “War on GWAR” to the metallic, punk-laden guitars of “Viking Death Machine” to the ultra thrashy “Auroch” and “Crushed by the Cross” to the raucous chanting of “Fuck This Place”—which went down well with the Vans Warped Tour crowd over the summer—GWAR still carries on the only way they know how to. Throw in a decent AC/DC “If You Want Blood (You Got It)” cover tune and you have one great GWAR album. The fretboard work of guitarist Pustulus Maximus (Brent Purgason)—who replaced fallen GWAR brother Flattus Maximus (Cory Smoot) in 2012—is stellar. His solos are blazingly superior, while his meathead metal riffs are simplistic yet mosh-worthy. If you have a hard time getting past the band’s shock rock costumes and its raunchy sense of humor after 30 plus years, then The Blood of Gods isn’t for you. However, diehard GWAR fans will fucking love it. ~ Kelley Simms