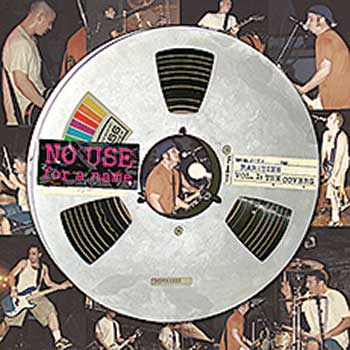 NO USE FOR A NAME
Rarities Vol. 1: The Covers

PUNK ROCK COVERS ARCHIVE: No Use for a Name understandably disbanded after the death of lead vocalist/guitarist/songwriter Tony Sly in 2012. The release of this collection isn’t a signal of the surviving members reconvening for a second kick at the can, but a culling of many of the non-album cover versions the band whilst in its heyday did for fun, salutation, love, and the publishing profit of the original artists. Being that these songs were recorded at various points during the band’s existence for different reasons and appeared on different releases, there exists an endearing lack of consistency that makes listening to this a shit-ton of fun. It also helps that the versions themselves are generally top-notch, where recognizable songs are given the melodi-punk treatment—check out the killer bass additions in The Vapors’ “Turning Japanese”—and that the selection is a mixed bag. Alongside Misfits’ “Hybrid Moments” and Dag Nasty’s “I’ve Heard,” they also tackle the themes from Laverne & Shirley (“Making Our Dreams Come True”) and The Munsters while subverting some of the original tracks with their own snotty flavor, like making the second part of “Fairytale of New York” hilariously NSFW, injecting energy into “Don’t Cry for Me Argentina,” and making Kiss’ “Beth” listenable. ~ Kevin Stewart-Panko