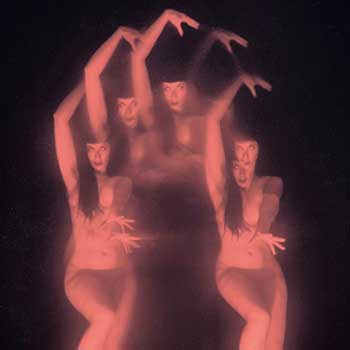 GOST
Rites of Love and Reverence

METALLIC SYNTHWAVE: Gost’s head Gost-er, multi-instrumentalist/engineer/producer James Lollar, has gone on record saying this album is the culmination of everything he’s learned and the experiences he’s had over the course of eight years writing, recording, and touring electronic music. Which isn’t exactly a shocking statement because you don’t have to be Mary Whiton Calkins to know that the events of the past shape the present and future. What stands out most about Lollar’s sixth album under the Gost guise is the increased darkness it’s slathered in and the heavier sounds incorporated throughout. Our guess is that the time Lollar spent sharing pre-COVID stages and grimy backstage rooms with the likes of Mayhem, Pig Destroyer, The Black Dahlia Murder, and Powertrip, playing the Maryland Deathfest, re-connecting with the Type O Negative portion of his record collection, and other dalliances with planet metal are chiefly responsible for the thunder expressed in the grooves of Rites of Love and Reverence.

“Bound by the Horror” is the unnerving connection between gothic dance floor pop and Cold Meat Industry themed power electronic nihilism. “November Is Death” appears to be all about taking a raw, cyberpunk inspired stab at the beats, rhythms, and Casio slaps ‘n’ claps of early Wax Trax! material, while the lurching bass propelling “Embrace the Blade” is undoubtedly cherry-picked from Peter Steele’s riff tapes. “Coven” introduces Godflesh’s mechanized pulsating patterns to a whole lotta soul (including a little disco hi-hat swing!) and combines it with the sounds of Front 242 being shredded through a jet engine. Though, as the obvious standout track, it really is to wonder why this song is buried as the album’s penultimate offering.

It’s not all slash, bash, and crash, however. There are substantial moments where the boot is eased off the listener’s throat—grand oases of lightness and chill amid the sinister oppressive din, as it were. “The Fear” hardly lives up to its title as it leans towards a black-lit dance night DJ’d by Peter Murphy. Similarly, “A Fleeting Whisper” also moves in the opposite direction as its title with a slowed down digital hardcore pace and post-punk arpeggiation that hardly jostles the deadbolt to the gates of hell in the way “Blessed Be” does as it attempts to replace the pink and aqua of the Miami Vice logo with sludgy, toxic black neon.

Considering the growing saturation of the synthwave scene and sound and its allegiance to John Carpenter, Joy Division, and day-glo dystopia, we’re happy to see Gost edging away from the pale. We’re even happier to see that move being made via increased heaviness. ~ Kevin Stewart-Panko