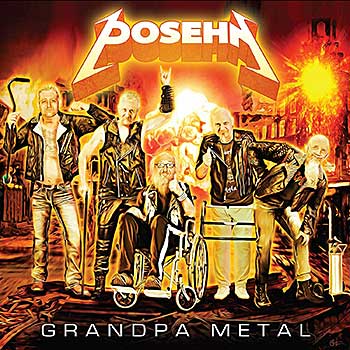 COMEDY METAL: Comedian Brian Posehn and his famous friends are here to rip metal a new pie hole. Grandpa Metal is insanely fun and surprisingly sound. Comedy/music albums haven’t always been known for their actual melodic quality, but Posehn gave great care to each track on Grandpa Metal, calling upon the likes of Scott Ian of Anthrax and Joe Trohman of Fall Out Boy to back his hilarious and monstrous vocals.

On “New Music Sucks” (and its reprise), Grandpa Metal calls out more pop idols than an early Slim Shady tirade, spitting venom at everyone from Macklemore (who Posehn later laments not having on the record) and Lady Gaga to Mumford and (his shitty) Sons and “Farti B.” The entire record is a pessimistic metal head’s dream and a comedy nerd’s fantasy. Posehn’s renditions of A-Ha’s “Take on Me” and Ylvis’ “The Fox (What Does the Fox Say?)” are revelations, opting to metal up these unsuspecting classics without losing the heart at their core—nostalgia and silliness.

Grandpa Metal sets out to be one part comedy and one part declaration of a genre divided and ends up becoming itself one hell of a metal record. ~ Jameson Ketchum