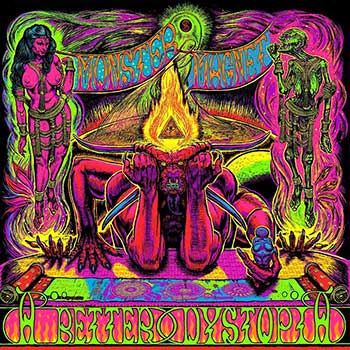 YOUR ACID AND PSYCHEDELIC ROCK ROOTS ARE SHOWING: If you’re going to offer up a covers album almost exclusively consisting of obscure acid and psychedelic rock bands, most of whom existed and broke up years and years ago, a courtesy might be to inform the listener who’s who. We’re guessing the final version of A Better Dystopia will have the original artists properly credited. However, there’s this thing called the internet to clear-cut through the confusion. All this so you can know which band and song Monster Magnet is covering on their pandemic boredom album, aside from Hawkwind, because everyone has at least heard of Hawkwind, hopefully.

The mushroom cloud imagery of the recitation of DJ Dave Diamond’s radio show address starts A Better Dystopia off with a stream of drug den consciousness ramble about lord knows what, setting the table for pieces from all corners of the worlds of 60s and 70s freedom rock. JD Blackfoot’s “Epitaph for a Head” is a herky-jerky biker anthem, whereas “Solid Gold Hell” originally done by The Scientists is looser and more stripped-down, but rhythmically tribal at the same time.

One thing that becomes noticeable as you make your way is how even though the selections here hail from the obscure underbelly of kaleidoscopic rock, it doesn’t necessarily mean they are left-field outliers. Many of the 12 selections are precisely what the general public thinks of when they think of psych rock, whether the song receives more of the Monster Magnet treatment or not.

Some of it rocks harder than others (The Cave Men’s “It’s Trash,” Table Scraps’ “Motorcycle,” and Jerusalem’s “When the Wolf Sits” would both leave Steppenwolf in the dust and resembles Monster Magnet themselves) and their rendition of Hawkwind’s “Born to Go” keeps that band’s oddball shimmer and super rocking propulsion front and center. Some of it is destined to go over with the dad rock crowd because it really reminds of The Animals (The Macabre’s “Be Forewarned”). There’s some protracted storytelling meshed in with unnecessarily obtuse parts on Dust’s “Learning to Die” (a band that shows you both how heavy and self-indulgent they can be), and, of course, there’s the requisite use of a sitar on Pretty Things’ “Death.” If you’re tired of staring at your lava lamp with the same old stuff spinning in the background, let this be your gateway to an uncovered dimension. ~ Kevin Stewart-Panko