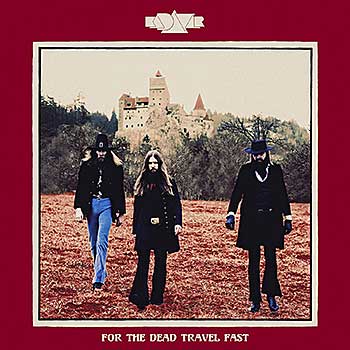 KADAVAR
For the Dead Travel Fast

OCCULT ROCK: For a band named after a synonym for a corpse, Kadavar’s work has been pretty upbeat to this point. One of the later entrants in the European throwback rock explosion around 2010 (along with bands like Graveyard and Witchcraft), they were never the most original, but their excellent songwriting helped them stand out. Their previous album, Rough Times, brought in some sinister elements. Their fifth album, For the Dead Travel Fast, fully embraces the darkness. The album cover alone looks like a promotional still for some forgotten 70s Hammer horror flick. It’s a noticeable shift, especially for longtime fans, but the German trio hasn’t abandoned their heavy throwback rock sound at all. They’ve just imbued it with occult grandeur. Songs like “The Devil’s Master” and “Dancing with the Dead” sound more like Uncle Acid and the Deadbeats than they do Graveyard, but in the best way possible. They also really know how to get a psychedelic groove going, as evidenced by the spooky solo on “Evil Forces” and the wah pedal abuse on “Demons in My Mind.” Even if the occult schlock shtick feels played out at this point, Kadavar once more distinguishes themselves with kickass tunes that’ll get caught in your head until you wind up in a mausoleum yourself. ~ Jeff Treppel