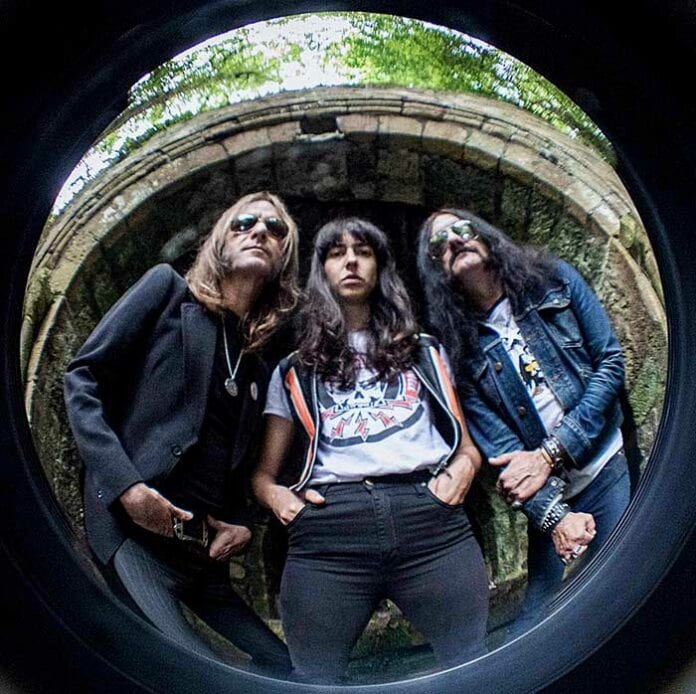 The more things change, the more they seem to plummet down the shitter. Fortunately, rock ‘n’ roll is alive and well and guaranteed to make us all feel a little bit better about the state of things. Purveyors of nuts-out, ragged and riotous proto-metal since 2008, Admiral Sir Cloudesley Shovell have dedicated the last decade to kicking against the pricks and whipping up a thunderous storm of gritty, snotty and irresistible heavy rock. In 2019, Hastings’ finest three-man riff squad will save the day yet again with their fourth album, the shrewdly-titled Very Uncertain Times on October 25 via Rise Above Records.

As frontman Johnny Gorilla explains, this band began in the pursuit of simple pleasures, and nothing much has changed.

“Our original masterplan was that we had no plan… and even fewer clues!” he laughs. “It was just three mates getting together to play covers of the stuff we’d always liked, and play a few pub gigs. We just wanted to play music inspired by the stuff we loved, 70’s heavy rock, 60’s garage and psych. But It turned out that we enjoyed our pre rehearsal jams more than our inept covers! We wrote four half-decent songs for a cassette demo, and thought it’d be a blast to get one single out that would immediately disappear into obscurity. Luckily, Lee at Rise Above thought the same. But we never imagined we’d be four albums in!”

A celebration of tweaked-out jamming and turbocharged psychedelic rock, every last moment on Very Uncertain Times speaks of a band with a full tank of sonic petrol. From the short-sharp Sabbath squall of Ten Years Later and the raging motör-he(a)donism of Mr Freedom to the loping grooves of The Third Degree and closer No Mans Land’s spiralling freak-out, it’s a powerful salute to the magic that happens when three mates get in a dark, sweaty room and crank everything up to 11. In uncertain times, Admiral Sir Cloudesley Shovell will never let you down.

A reassuring presence for ferocious rock ‘n’ roll and medicated madness in a crazy, doomed world, Admiral Sir Cloudesley Shovell are back in the van and heading towards proto-metal nirvana at maximum speed and with no brakes. These may be uncertain times, but you can rely on the Admiral to keep the sonic accelerator floored.   “Our main hope, as always, is that we sell millions of copies enabling us to retire,” laughs Johnny. “Purely to spare the world from having to endure another greasy Shovell album! Oh, and we want to plague the world’s population with as many stupidly loud gigs as possible. Let’s face it, we sure don’t sound like anything else out there!”