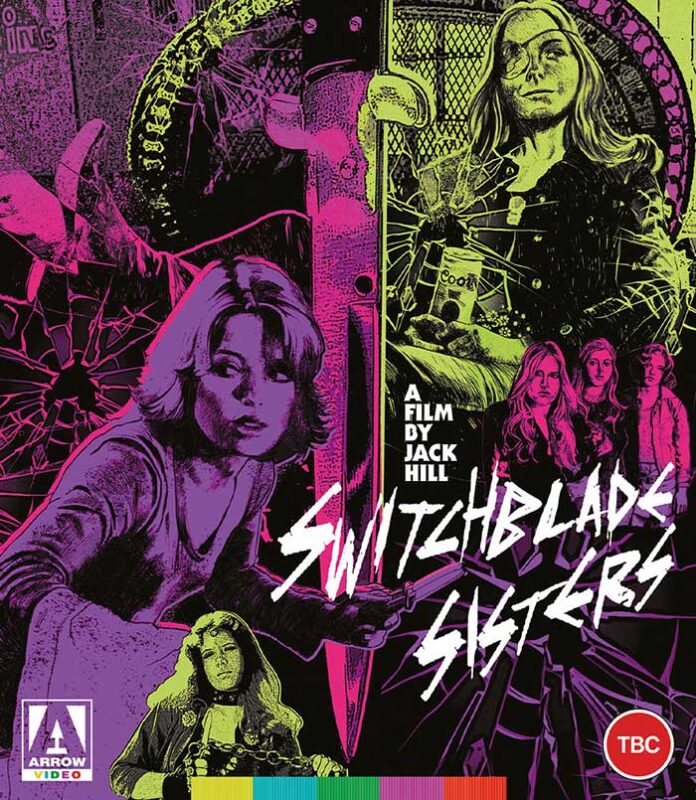 It’s a safe bet to label Arrow Video as the Criterion Collection for genre film at this point, as the label has given a home to so many definitive restorations of classic exploitation cinema. One absolute gem from that world has to be Jack Hill’s Switchblade Sisters, so it only makes sense that Arrow would include this title to receive a Blu-ray upgrade.

The film itself is probably best known for being championed by Quentin Tarantino back in the mid-90s, with Switchblade Sisters receiving a DVD release on the filmmaker’s own Rolling Thunder Pictures label. Tarantino also brought the flick back into theaters for a limited engagement, although it should be said that Hill’s vision seems to be more appreciated now than it was back during its original run, or even that re-release. Maybe it’s because we’ve had more time to appreciate the subtleties and care Hill put into this picture, or because film criticism has become much more diverse over time.

That’s because Switchblade Sisters has a little more going for it than your average women in prison flick or revenge picture. Oh sure, there are still beautiful, tough women engaging in all kinds of cartoonish violence, and the tough, funky musical scores brings to mind the blaxploitation world celebrated in films like Hill’s own Coffy. Or maybe it’s the inspiration behind Switchblade Sisters that sets it apart, as Hill utilized themes from Shakespeare’s Othello and Ayn Rand’s The Fountainhead when writing the script. Fans certainly have picked up on these levels of depth within the picture, which has helped the film remain in the conversation whenever unique examples of the genre are requested.

Either way, the film takes a very basic premise of juvenile delinquency, gang violence, and jealousy and adapts them in a way that’s poetic and poignant for the grindhouse set. The women here in the Dagger Debs aren’t just molls for the male gangs, they are the gang—a kick-ass girl gang that we’re willing to follow all the way to the edge of the cliff and beyond. The leader is Lace, played by Robbie Lee, and the new recruit is Maggie, played by the gorgeous Joanne Nail, who would be a future fixture on television throughout the 1970s and 80s. Then there’s Patch, the visual lightning rod played by Monica Gayle, who was a constant and welcomed presence throughout many softcore and sex comedy cheapies during the earlier part of that decade.

These three serve as the crux of the film’s narrative, whereby Maggie slowly but surely takes control of the Dagger Debs, just as Patch is sowing seeds of jealousy and discord that are already festering within Lace against Maggie and her boyfriend Dominic. I don’t want to spoil too much here, because it’s really a lot of fun watching the actors let loose in their respective roles. There’s also a great supporting cast, as well, including Lenny Bruce’s daughter Kitty, who appears in a slightly comedic role as the Deb member named, ahem, “Donut.”

The atmosphere moves deftly from black comedic to deadly serious, with an ending that’s pure drive-in gold. The performances are universally solid, the pacing is brisk, and it’s truly a film that gets better with age and every subsequent viewing. You really can’t call yourself an exploitation fan if you haven’t caught Switchblade Sisters at least once.

This Blu-ray from Arrow improves greatly upon the previous DVD from Rolling Thunder. For starters, there’s a new commentary track from veteran writers Kat Ellinger and Samm Deighan, which easily holds up to the levels of quality upheld by previous tracks. I first came to hear Deighan’s work during the commentary for Fun City’s amazing I Start Counting! disc, and she’s great here, as well. Both her and Ellinger are clearly huge fans of the film, and their passion runs throughout their spirited discussion. In fact, the pair seem so enthused to dissect every theme and idea behind the film, that actual opportunities to point out specific scenes get rushed through, but this isn’t a criticism, as the conversation is very approachable, as if the pair are sitting across from you on the couch.

It would’ve been nice to port over the track between Tarantino and Hill, but archival materials are included here, in the form of a long making-of featurette, as well as interview footage from the original rerelease back in the 90s. The print quality is fantastic, with skin tones looking bright and vibrant, and the sound mix (with subs) not showing any sort of distortion or damage. A cool booklet is also included, featuring articles from the likes of Heather Drain and Alexandra Heller-Nicholas, while a still gallery and trailer rounds out what’s yet another stellar presentation from the Arrow Video crew.  ~ George Pacheco