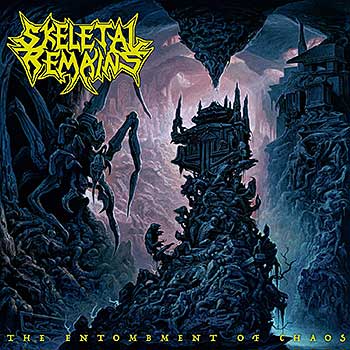 SKELETAL REMAINS
The Entombment of Chaos

BLISTERING OLD SCHOOL DEATH METAL: Skeletal Remains solidify their monument in the modern death metal realm with the release of their new album, The Entombment of Chaos. When joining the sonically unforgiving landscape of death metal, one can expect to find a morbid sense of defeat. Many bands have entered and it seems that only a few have been able to trudge long enough to become a silhouette on the bleak horizon for newcomers. Skeletal Remains are not newcomers by any means. They have been able to carve their own path with a classic style and a handful of increasingly impressive releases since 2011.

The band’s fourth album The Entombment of Chaos is packed to the brim with vicious riffs, roaring vocals, and some of the most intensely precise metal drumming in recent memory. With most songs clocking in around the five minute mark, this album is a long-sprinting endurance test for the listener as well as the band. Fans of 80s and early 90s death metal will undoubtedly find something to appreciate in each song, while the uninitiated can at the very least respect the extreme musicianship. The riffs are tight and worthy of the desired whiplash. The guitar work alone on this album is far beyond average with unexpected breaks that keep things fresh as the album goes on.

The album production seems to have ramped up from the band’s 2018 full-length. This is not to say that this album is more automated by any means, but there is a noticeable definition to the drums. They are more powerful, more defined, and continually drive this album forward. It does not appear that an official drummer has been named after recent lineup changes earlier this year, but former live drummer Charlie Koryn stepped into the studio and knocked it out of the park.

Guitarist/vocalist Chris Monroy has a unique twist on a vocal style reminiscent of bands like Obituary and Death. A perfect example of this is in our favorite track “Congregation of Flesh.” The vocals simply sound ravenous and well suited to please old school metal heads. However, Monroy is able to pull from a broad sphere of heavy influences in his delivery that could allow this band to crossover and catch some fans on the fringes.

All in all, The Entombment of Chaos is exceptional and in many ways continues to push the extremes further into the unforgiving landscape of the genre. While Skeletal Remains may not yet be able to take their place as a towering silhouette on the death metal horizon, they are definitely starting to cast a shadow. ~ Clint Gee