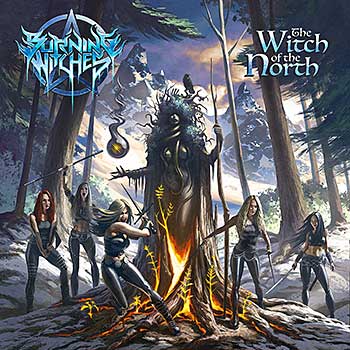 BURNING WITCHES
The Witch of the North

CLASSIC HEAVY METAL: Since its 2015 formation, Swiss all-female, classic heavy metal quintet Burning Witches has been on fire when it comes to releasing records. On the theme based The Witch of the North—its fourth full-length album in six years—Burning Witches takes its cue from metal legends such as Doro/Warlock, Judas Priest, and Accept on its massive 14 tracks. The rhythm section of bassist Jeanine Grob and drummer Lala Frischknecht isn’t flashy but very powerful, while guitarists Romana Kalkuhl and Larissa Ernst riff and solo away menacingly. Meanwhile, this is Dutch vocalist Laura Guldemond’s second album with the band, who joined in 2019.

Opening the record is “Winter’s Wrath,” a haunting one-plus minute instrumental track that does a great job of building anticipation. First song proper and title track performs well with a classic metal segue, decorated with twin lead melodic guitar harmonies, ominous chanting, and mid-paced riffs and is performed with passion, power, and precision. On “Flight of the Valkyries” and “Lady of the Woods,” Burning Witches really shows off its piercing, melodic side, while “Nine Worlds” displays fantastic Norse mythology storytelling. “For Eternity” is one of the most classic metal sounding tracks on the record, with a driving rhythm section and surging riffs. On the band’s last album, it recorded a splendid cover of Manowar’s “Battle Hymn.” This time around, the ladies perform an awesome version of Savatage’s “Hall of the Mountain King” as a bonus track, which fits in well with the rest of the band’s original material.

Produced by famed Destruction bassist/vocalist Schmier, who also serves as the band’s manager, he took a hands-on approach in the studio and captured the band’s classic metal sound with a modern edge. However, at 14 tracks and over an hour in duration, the album is a bit too much to digest all at once. All the tracks are well crafted, but there are quite a few in the same tempo, which makes it hard to differentiate between each one. Burning Witches has made decent strides within the heavy metal world since its formation, and on The Witch of the North, it’s more of the 80s inspired classic heavy metal that we’ve all come to expect from the band. ~ Kelley Simms