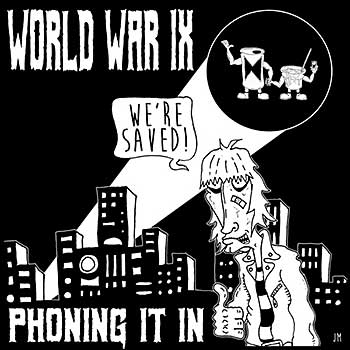 WORLD WAR IX
Phoning It In

NOSTALGIC RAUCOUS PUNK ROCK: With their latest EP Phoning It In, World War IX hops in the wayback machine and transports us back to the heyday of New York City street punk, the kind you’d hear emulating from dive bars and dimly lit clubs on every corner. This new five song set is a hyper caffeinated blast of old school punk that goes by in the blink of an eye, so make sure you do your best to pay attention. Well, not really, because you can always just press play again. Chances are you’re cracking a few cold ones while indulging, so it stands to reason you’re phoning it in while listening to Phoning It In.

Phoning It In clocks in at less than eight minutes over the span of five tracks, and it goes by quick. This is a party record if there ever was one, opened by the aptly titled “Fired for Partying,” a fast and loose punk tirade reminiscent of early Ramones, complete with gang vocals and frenetic guitars. “Coke Machine” is even tighter and more concise, upping the amplitude on Phoning It In. “Larry’s House” is quirky to say the least, with irreverent lyrics like, “Larry’s House is where it’s at, Larry’s dog and Larry’s cat, Larry’s mom is getting fat, I don’t wanna be a dad.” If you’re not having fun with your punk rock, then what the hell are you even listening for? New frontman Johnny Celentano, the same man who created the card game Shit Happens, which inspired hit TV game show The Misery Index, fits in perfectly at the helm of World War IX. “Portrait of Sobriety” is more trashy punk rock fueled by sprinting guitars and drums that follow suit, and the boys cap things off with a cover of GG Allin’s “NYC Tonight,” a braggadocios take on the original that Allin himself surely would have been proud of.

And to add another layer to Phoning It In, guitarist Justin Melkmann created a four part comic book series chronicling the band’s history, titled Thank God It’s Monday. The series details Melkmann’s life and times as a young record collector turned burnout music fanatic and finally, a musician in a punk rock band.

Phoning It In is raw, boisterous, and rough, just the way punk should be. And chances are, it took you longer to read this review than it would to listen to the album. You should go do that right now. ~ Brian Campbell