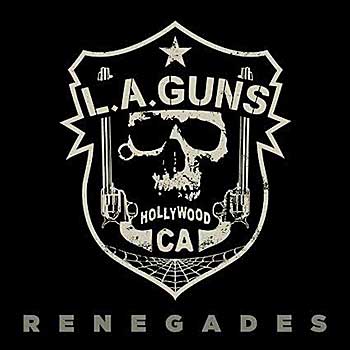 SUNSET STRIP HARD ROCK: Whatever opinion you hold about bands contentiously splintering into two versions, at the very least we can commend the likes of Entombed A.D., Venom Inc., and others for adding suffix identifiers and drawing a dividing line, regardless of how flimsy it may be, in the sand. In the case of vintage hard rockers L.A. Guns, well, my head is still spinning after reading up on their history and trying to keep track of how many people have gone through the multiple versions of the band that have existed since originally forming in 1983. Currently, there are two versions—one featuring “classic members” bassist Kelly Nichols and drummer Steve Riley, the other features the band’s namesake, guitarist Tracii Guns and veteran frontman Phil Lewis. And nary is there an A.D. or Inc. in sight to help anyone wishing to dive into the antagonistic morass.

For one reason or another—the chief one, we’re guessing, being their inability to maintain a steady lineup—L.A. Guns always played second fiddle to their Rainbow Room polluting peers in GN’R, Poison, Crüe, et al. Their fortunes have obviously dipped southbound since the glory days of their first handful of albums, but you have to give it to the various incarnations of the band and the $6,000,000 worth of hairspray that has blown through the band’s revolving door. To date, L.A. Guns, in some form, fashion or faction, has never stopped.

Renegades is the latest from the Nichols/Riley version of the band. Re-joined by ex-bassist turned guitarist, Scotty Griffin, this version does what anyone would expect this version (and the other version) of the band to do—deliver conventionally structured, Sunset Strip hard rock with crotch rocket lead vocals and blustery guitar solos that summon Jimmy Page’s shredding persona. For those out there that remember the glory days of excess when hair metal ruled the charts, Renegades will stand out for a different reason—not having the production largesse of 80s metal extravagance. Whether it’s because of age and maturity or sound proportionally contracting with shrinking budgets, the band offers a more stripped-down, streetwise approach to present a hard rock album sanded down to its base.

Bar flies and pool hustlers should eventually be humming the choruses to tracks like “All That You Are” and “Crawl” as they go about their activities in the darkened corners of your local sports bar/watering hole, but there’s something missing in the dynamics department that mutes the grandiose impact of yore. That’s not to say there aren’t a handful of sweet headband and bandana shaking rockers here. The title track probably should have been in the tractor scene in the Footloose remake. “Don’t Wanna Know” drips Hollywood Blvd. sunshine and sleaze. And “Why Ask Why” sounds like someone went through a bunch of old Fostex 4-track demos for inspiration. Additionally, the predominately acoustic ballads “You Can’t Walk Away” and “Would” spin darker tones and some of the most interesting studio/production tricks of the record.

The trouble is that the limitations of four-on-the-floor hard rock/metal without massive (and consequently, expensive) production propping it up are expressly illuminated on Renegades. The result is that too much of the album sounds like a better than average bar band. Then again, considering the last time any of us has had the chance to see any band—good or bad—in a bar… ~ Kevin Stewart-Panko